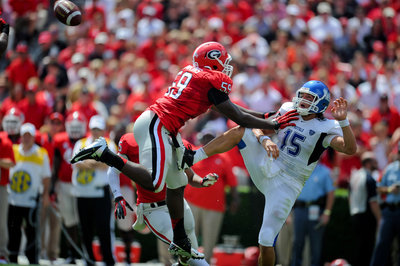 Say that headline three times fast. It may be the only break Kentucky catches today, but Georgia’s star outside linebacker Jarvis Jones will not play today. The All-American has been out with a sprained right ankle since the October 6th loss to South Carolina, in addition to being bothered by a strained groin and sore left knee.

In his place will be Jordan Jenkins, a true freshman and former five star recruit who has 15 tackles and 3 sacks on the season. His father announced the news on Facebook, much like how my mother announced to the world when my little sister decided where she was going to college. Parents are sweet.