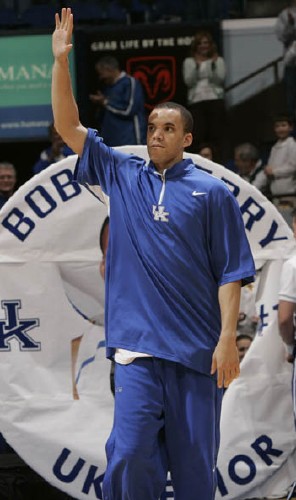 Over the next few days, we’re going to revisit some classic UK/UofL posts in KSR history. Prepare yourself–there are a lot. First up: from 2008, former Cat Bobby Perry’s views on the rivalry.

First and foremost, I would like to thank all of Big Blue Nation for their support, love and loyalty through my four years as a wildcat and the year and a half since my graduation. I think it if fitting I write my first blog on the eve of the greatest rivalry in all of sports. On a cold December day in 2001 is when I saw my first Louisville vs. Kentucky basketball game. It was Rick Pitino’s first trip back to Rupp Arena since he left for the Boston Celtics. And boy was it a bad one. It wasn’t much of a game from what I remember. But one thing I do remember is the excitement in the faces of the 24,000 fans in Rupp Arena rooting for their Wildcats. I remember I saw something there that day that I have never seen at a UNC vs. NC State game or and UNC vs. Wake Forest game of even a UNC vs. Duke game. I knew there was something special about this place the moment I stepped foot in Rupp Arena. I knew this rivalry was special and I knew that day I wanted to be a part of it.

Everywhere I go I get asked this question. Who was your favorite opponent to play against? Without hesitation my reply would be, Louisville. Why? Because I love it when we are in Freedom Hall and we beat them on their home floor. There is no better feeling than going into someone’s house and beating them in front of their fans! Also, because every year we beat Louisville it fell on or around Mr. Keightley’s birthday. And to see the smile on that great man’s face when Patrick Sparks nailed three straight free throws to close the deal my sophomore year was exhilarating. Running Back to the locker room, dancing and screaming with him has to be one of the most memorable moments of my life. This is a man who has been front and center on NCAA Championships and every time we beat the Cards he is a kid again. It can’t get much better than that people.

Folks, everyone knows in rivalry games records go out the window, predictions don’t mean anything and rankings couldn’t be any more irrelevant. That is the special thing about a true rivalry. It doesn’t matter who the players are on the field or court. The only thing anyone cares about that day is the name on the front of the Jersey. Kentucky fans rooting for the blue and white and Louisville fans rooting for the red and white and sometimes black (make up your mind, please!). This is the greatest rivalry in sports, I am honored and privileged to have been part of something so special.

17 Comments for From the KSR Vault: Bobby Perry on Kentucky/Louisville