I’ve never gotten the vibe you beautiful people are seriously concerned with anything involving the NBA, but I ask your help.  Chris Paul is incredible.  Right now, he might be the best point guard in the league, over Steve Nash and Jason Kidd.  And honestly, it’s unfair.  Paul’s the rare point guard that can score at will but really knows when it’s better for him to get his and when he should help the cats on the team make some money for themselves.  Few point guards that can score understand that thin line.

But here’s the thing… 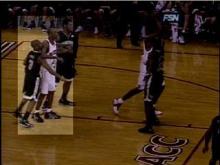 That is Paul right before he chose to punch Julius Hodge in the kids in 2005.  Walked up from behind and stuck him in the inseam, then just kept it moving like punching people in the kids is what’s hot in these streets.   It’s not.  It should be punishable by death.

I haven’t forgiven Paul for this.  Not that I care about NC State, but I’ve got solidarity with anyone that’s taken a bad one to the huevos.

When should I forgive this man for his sin?  Is there any forgiveneess for such a dastardly move?  Cuz dude’s the best out there right now…but I still feel bad for acknowledging anything close to being humanity within him.  He hits people in the kids.

No love for that.  None.