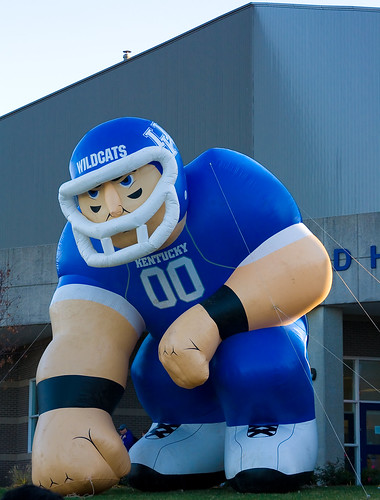 I officially have the football bug. I can’t wait for September 4th when our team travels to Louisville to take on Charlie and the Cardinal Factory (Their motto? Where Fancy Is Bred. Seems appropriate). If you are like me, you need a fix every now and then to satiate yourself because it is gonna be a long two months before the Big Blue gets back into action. Help yourself out and take a look at some of these Kentucky Football-related links:

1) UK announced that their Kickoff Luncheon will be held July 30th at 1:00p at the Lexington Convention Center. $40 a person or a table for ten will cost you $400 (They do the math for you). Joker will be on hand to discuss his plans for the season (something to do with winning) and there will be time for a fan Q & A. The afternoon will end with a 2009 highlight video that I’m sure will replay heavy doses of the Georgia game. Click the link for ticket info.

2) Former UK linebacker, Dr. Jim Kovach, was inducted into the Academic All-America Hall of Fame. Kovach is the leading tackler in UK history with 521 and played during the period when UK actually won a piece of the SEC Championship (1974-78). He holds the distinction of being the first player in modern NCAA history to go to medical school while playing D1 football. Kovach joins dignitaries Merlin Olsen and Bill Bradley in the Hall.

3) It is a few days old, but Dave Miller over at Yahoo has a nice story on the transition from Rich Brooks to Joker Phillips. Miller tabs Brooks as “one of the most underappreciated head coaches in SEC history.” Sounds about right.

4) Sporting News is counting down the top 100 college football teams. Today, they rank Kentucky #58. You can click on the link if you want to, but it has all the standard lines you have heard before: Offensive line issues. Defense not scary. Louisville game the key matchup. Rinse, lather, repeat. Nothing special. They do rank our QB talent at C+. Really? Seems a touch low. (Of course, Hunter beat me to the punch on this one, but I’m keeping it in just in case you guys missed it).

5) Larry Vaught talks to new recruit Daylen Hall about his abilities. He needs to ask him about his Carrie Bradshaw level of commitment-phobia (Did I just shoehorn in a Sex In The City joke into a UK blog? Yep. I did it for Kate Martin). Hall doesn’t do much to quell the concern over his allegiance to UK:

“Kentucky is definitely my favorite, but if I get another good offer, I would consider it. I am not sure I would change my mind because Kentucky is close to home and is a great school. But I would have to consider anything that comes along”

UK is like the safety girlfriend in this situation, but I guess it is better to go out on a date and hope for the best than never to have been asked out at all.

6) This has nothing to do with UK football, but it does have something to do with the Wildcats’ second opponent, Western. WKU will play Indiana in their home opener in Bowling Green. It is the first time the Hilltoppers have ever hosted a Big Ten team and this one will air on the Big Ten Network. Western opens the season on 9/4 at Nebraska before traveling to Commonwealth on 9/11. Pretty decent early schedule for an in-state school that most Kentucky fans root for when they aren’t playing the Big Blue.