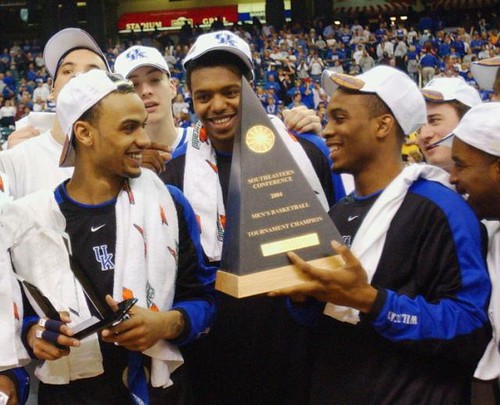 One of my favorite all time Tubby players, Gerald Fitch, is burning up the twine over in Spain. Our own Matt Jones told me about conversations he has had with Boogie’s new agent regarding the former UK guard. The Columbus, Georgia native is reportedly in the running for the league scoring title. What league? Well, it is kind of confusing. The Spanish version of the NBA, the ACB, operates sort of like soccer where teams are promoted and demoted. Fitch plays for Baloncesto Fuenlabrada which is currently in the highest division of the ACB. So, that one. Incidentally, it is the same league where Ricky Rubio, he of Olympic and NBA snubbing fame, is lighting it up so the talent level is quite high.

One of the things I liked best about GF while he was at UK was his ability to get a rebound. Dude had a nose for the ball and was one of two guards (the other being Derrick Jasper) that seemed to be able to get a rebound when the Cats needed it most (despite size and position). Guards that get rebounds get them because of hustle and awareness. I appreciate both qualities in a basketball player and Fitch had them in spades.

We wish Fitch luck in his quest for dominance over the Spaniards. Here is some video of the Fitch-ster playing for Spain and I must say I won’t ever get used to seeing him wear orange. I’m not Chris Tomlin so my Spanish accumen consists of what I pick up from Sesame Street and Handy Manny so you are on your own with the translation: