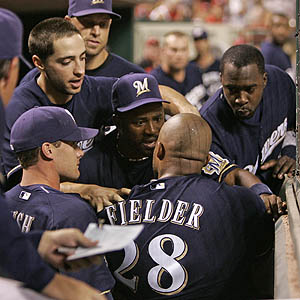 (I’m gonna talk some baseball here because I think this is a kinda interesting topic. Forgive me if you don’t care, but who’s really gonna miss the chance to read and talk about fighting?)

…and that’s it. They’re noteworthy, of course, if only because they’re so much fun to watch. Show me a man that claims not to like a good scrap, and I’ll show you a liar.

But are fights some catalyst that will bring teams together? Eh, maybe.

That Steve Smith fight at Carolina’s training camp? That’ll affect the Panthers one way or another. Either they’ll say, “look, it’s abundantly clear that we need to get it together,” or they’ll say, “I’m just waiting for my chance to stomp a mudhole in Steve Smith.” Tends to be how it goes when someone gets his nose broken at the job. That’s the sort of thing that sticks with people.

Now, that sitch in Milwaukee? Just another day at the office.

One thing about athletes — they’re more likely than the average man to use hands to resolve a dispute or purge frustration. They’re a bit less concerned with the consequences than civilians. For civilians, fighting a co-worker usually means unemployment. On top of that, there’s a distinct chance John Q. Public will get his ass kicked. Athletes tend not to worry about either. Fights usually don’t make the personnel files, and few fear beatdowns. That isn’t the job for people that are scared of much involving contact.

So Prince Fielder pushed that other guy (whose name I’m too lazy to look up). And? Stuff like that happens all the time. It’s not something to analyze with regards to the future, and I can prove that statement very easily.

Have you ever looked at a team, seen it either surge or fall apart, and thought, “man, I wonder if someone fought in the locker room when this streak started?” If you haven’t, that should give you an indication of how irrelevant fights are when they take place off-camera. So how relevant can they really be on camera?

Long as no one’s seriously hurt, a fight is no biggie. Words to live by.