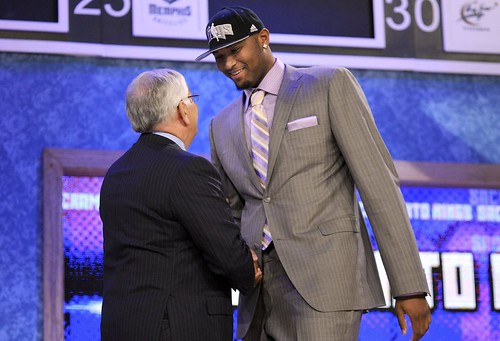 One of the bigger stories (if not the biggest story) of this past NBA draft was the ‘maturity’ issue that involved our own DeMarcus Cousins. Now that the draft is over and all the posturing and Jedi-mind tricks are finished, we can gain a true idea of what some experts really thought about the Mobile, Alabama native.

Let’s start with this article from the Sacramento Press that offers a quote from Sacramento Kings GM Geoff Petrie:

“We did a lot of background on DeMarcus. We had him out here for visits, we spent time with him, we interviewed him in Chicago and had a very lengthy interview there,” said Petrie. “We spent a lot of time talking with people that have been involved with him throughout his development as a young player, starting back in junior high school and high school. People that have no real particular axe to grind or anything to gain by what they say or they don’t say. I think the message that came back was very consistent.”

So after studying the ‘head case’, the GM and coach could find nothing wrong with Cousins and are very excited to get him. Let’s move on to a draft report card from the bleacherreport.com:

Fantastic draft for the Kings. They got the draft’s top talent in DeMarcus Cousins . . .Often times people blow character concerns out of proportion, and that is exactly what has happened to DerMarcus Cousins. Nothing will ever change the fact that Cousins has some of the most talent you’ll even see from a teenager, and has all the physical tools to become Shaq-lite. Him and Tyreke Evans should transform the Kings into a top offensive team in a matter of just a few years.

So Cousins alone essentially makes it a fantastic draft for the Kings (all respect to Hassan Whiteside, but I doubt their grade would have been an ‘A’ had it combined him with Ekpe Udoh or Greg Monroe). Finally, let’s get some perspective from an expert in the behavior of DeMarcus Cousins. Namely his mother in this article from the Sacramento Bee:

Monique Cousins described her son as equal parts “grizzly bear and teddy bear” with maturity issues “just like all 19-year-olds who think they have all the answers.” Once you tell DeMarcus what he needs to do, diet or whatever, he’ll stick to it. He’ll do anything to win, and he is emotional. If he ever gets a championship … I think y’all will have to take him to a hospital.”

Great lines outta Mama Cousins. It is easy to see where Boogie gets his charming personality traits.

When BTI surveyed us about our all-time UK teams, I wondered about including Cousins in my list. I knew he was the best I had seen, but I needed to gain more perspective. When I polled friends, family, and coworkers, every single person thought Cousins was the best they had ever seen play center at UK. These weren’t just 8th graders that remember the Pitino-era via Youtube and restaurant reviews. My confidants are guys that have followed the team since Rupp stalked the sidelines and none of them hesitated to including Cousins in their list. That was enough for me and now, apparently after extensive homework and analysis, other experts are catching up. This guy is something special.