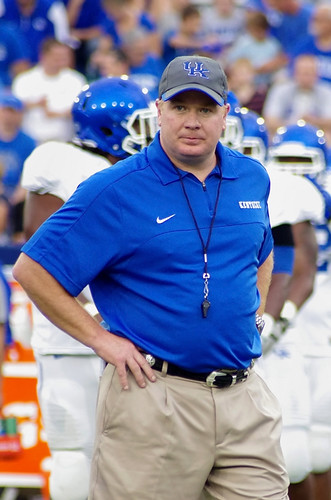 According to ESPN’s Edward Aschoff, development will be the name of the game in Mark Stoops’ first season as Kentucky’s head coach. Aschoff previewed the Cats for ESPN’s SEC blog this morning, and said that while Stoops has a huge task ahead of him, “the good news is that the defensive-minded coach will have a lot of talent and experience to work with along his defensive line.” Aschoff singles out Donte Rumph, Mister Cobble, and Bud Dupree as some of the team’s top players, but predictably, says the biggest question marks are at quarterback and wide receiver.

There are mixed reviews at running back. Even with the loss of Josh Clemons for the second straight year, the Wildcats have senior Raymond Sanders and sophomore Dyshawn Mobley, who is returning from hernia surgery, to work with. Both had good springs, but with Clemons’ injury and the departure of Justin Taylor, both have to remain healthy this fall because there isn’t much depth at all.

And let’s not forget about the secondary:

Players have to step up at receiver and tight end, and the Wildcats are thin at linebacker and in the secondary. Three starters from the secondary are gone, while losing Dupree to the defensive line leaves a major hole at outside linebacker. Kentucky will get help in the secondary this fall, but that help will come in the form of 2013 signees.

However, Aschoff says that it’s not all bad; while a bowl game is a “lofty goal” (understatement of the season?), “there’s no doubt that the Wildcats will be more competitive in 2013.”

Thank God for that.

20 Comments for ESPN previews the Cats, says this season is for development