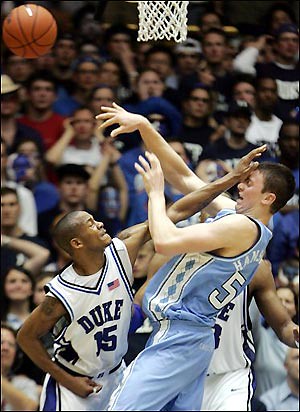 This week is the ESPN created “Rivalry Week” in college basketball. Ever since The Worldwide Leader came up with this schtick a few years back, their showcase game has been Duke vs North Carolina. Despite the fact that many of the other elite basketball programs play their biggest rivals at different points in the season, ESPN slaps the ‘rival’ label on all the games they broadcast during the Duke/UNC matchup. I mean, I guess Baylor/Nebraska is a rivalry of sorts and Washington/California are somewhat geographic rivals, but Michigan State vs Penn State? UNC vs UNC State? Memphis vs Tulsa? Most of these games are pretty weak and considering them true rivals is a stretch. Anyway, I couldn’t be happier that the shine has been knocked clear off the hallmark game of this contrived event. North Carolina might not make any post season tournament and Duke isn’t exactly wearing Chuck Norris pajamas. So, instead of watching a basketball game that pales in comparison to VCU vs George Mason, please consider some of these alternatives:

1) Hold a dunk contest with Kate Martin.
2) Try to find the UK/Alabama broadcast that wasn’t preempted by the epic battle of Colonial Athletic Association rivals.
3) Incorporate the John Wall Dance into a game of Dance Dance Revolution. Send the video to KSR for posterity.
4) Help the University of Missouri catch a tiger.
5) Find out the best way to recycle all your Bryan the Intern for Congress campaign memorabilia.
6) Shop around for a present for Coach Calipari’s birthday. I hear he likes donuts.
7) Try to recreate the Guinness commercial using household objects.
8: Grab a flowbee and give the kids a Matt Jones haircut.
9) Work on your treasury of one-liners so that you can finally have a comment posted in a KSR Live Blog.
10) Figure out if Ed O’Bannon’s lawsuit will somehow limit the excruciating replays of Christian Laettner every March.
11) Comb your yearbook and family albums for Awkward Family Photo submissions.
12) Setup Four Square on your cell phone and try to become the Mayor of Two Keys.
13) Catch up with Lindsey Vonn on the Winter Olympics.
14) Order yourself a DeMarcus Cousins Starter Kit. Hat. Glasses.
15) Watch the ESPN Classic repeat of Douglas/Tyson. This is a serious one. ESPN Classic is rerunning the Tyson-Douglas fight at 10 pm. In a pre-internet era, the news Sunday morning that Tyson had been beaten was shocking. Iron Mike was a force in the 1980’s (With the best introduction ever. When he entered the arena to Phil Collins music wearing essentially a white towel with a hole in it, you knew some wicked stuff was about to happen) and nobody saw his downfall coming. It has been a tough road for Tyson and he has become sort of a joke, but maybe he has a second career in comedy.
16) Scour Ebay for a slightly used Rex Ryan Flyers hockey jersey.

Have anymore? Mention them in the comments.