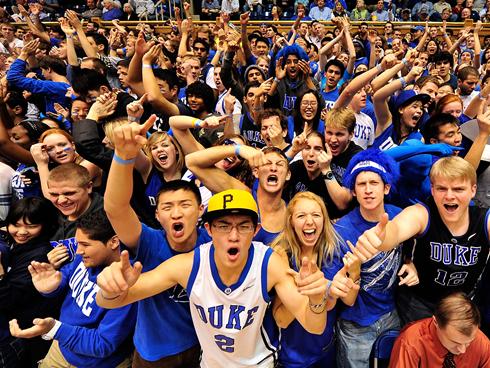 I count at least eight.

The Cameron Crazies are catching a lot of heat this morning after horrible accusations from a handful of people who were at last night’s game against NC State.  According to a couple NC State reporters and fans at the game, members of the Duke student section chanted, “How’s your grandma?” to Wolfpack guard Tyler Lewis.  Lewis lost his grandmother last Saturday and the two were very close.

Now people are saying the crowd was chanting, “Past your bedtime!” because Lewis looks like a little kid.  I’ve watched this video numerous times and I hear both:

And there’s this comment from a Duke fan blog:

I’m honestly ashamed to say I’m a duke student. I’m lost grad, and I was stunned to hear this Hurtful and wildly inappropriate chant. I was @ the game, I heard the chant. Amazing what will be spun as being “appropriate” after they royally screw up. I was at the game, section 19, row 3, and the crowd was not only chanting, but also spreading the word, to chant ‘how’s your grandmother’. Not 1, 2 ,3, but 4 separate people specifically told me his grandmother died as the reason for the chant.

Classless students who are “mightier than thou” have ruined any good the CC wee did.

Duke fans can be the worst, but I still find it hard to believe that even they would stoop this low.  This would be the lowest of lows.

104 Comments for Duke fans accused of worst chant ever