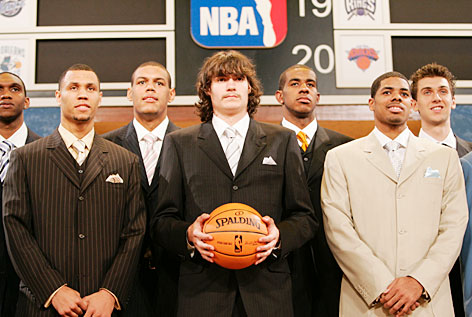 A prime example of why you should draft on college production.

In light of Patrick Patterson’s tweet, Eamonn Brennan has written up a mock draft – only if decisions were made solely on college production and not ‘potential.’  It would be ludicrous (Luda!) to think any NBA GM would think like this, but perhaps there are some lessons to be learned from this exercise.  Brennan finds it surprising that someone averaging 3 and 3 could be a lottery pick (you know who you are,) and it’s tough to disagree.  Still, it’s obvious that potential should play some part in the drafting process, but that won’t stop us from playing the hypothetical on a slow news day.

I’ve reproduced the short list here, but head over to ESPN to check out his reasonings.

Notably absent is Patrick Patterson.  I’m assuming Brennan just forgot about him, which is a sin in itself, because there is no reason he would be drafted – even on a college production level – behind Greg Monroe or Cole Aldrich.

So KSR readers, what do you think?  Is there merit in drafting based on college production?  Is the unmeasurable ‘potential’ more important?  Or is there another category that should be paid attention to, like the ability to cause people to write songs about you?