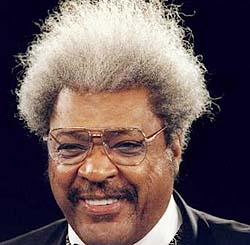 Today’s birthday honoree is a man that truly is one of the more unique characters in existence and could have been produced “only in America.” Don King has lived one of the more diverse and wide-ranging lives of any public figure in recent memory. He grew up a gang member, proven not once, but twice of killing a person. The last of these two killings produced a 4 year sentence in jail, where King seemed well on his way to a life of crime. But coming out of the penitentiary, he found that he could be just as crooked and generally legal by becoming a boxing promoter. His work led him to the famous “Rumble in the Jungle” between Ali and Foreman, and from there his attitude and crazy hair helped him become a star. He has gone from mentor to the Black Panthers to an attendee at the 2004 Republican National Convention (only in America) and he now spends his time waving his flag and spewing nonsense. King also is known in my world as the “guy Matt randomly hugged in an airport on a dare and who looked as if he might kill him,” during my time in law school. Yes, no matter what, Don King is an American icon…..just hide your money when you are with him.

(1) ALEX LEGION: The last three days have been dominated by one story and one story only, the fate of Alex Legion. There is a great deal of information out there, some credible and some not so credible, but all pointing in different directions. I have spoken with two people who generally give me good info and each have produced vastly different conclusions. One insists he is staying, one says he is gone. Evan Daniels of Scout.com was on our show today and said that the info he was hearing at that time pointed to him being on the team, but also he was very clear to say that this is all just conjecture at this point and no one knows for sure. The momentum of the night is definitely moving towards him not being a Cat again. I thought the UK media comment that there was nothing to announce because Alex “was not on the team” was telling. At this point Alex is not a Cat. Will that change? Well my guess is we will know for sure by Billy Clyde’s press conference at 4:30 on Thursday. There he will talk about the IU game and surely get asked about Legion. I expect we will know then if there is any chance Alex comes back. Until then, it is all just a guess. There is interest from Alex in returning….but whether that interest leads to a return to the Blue and White remains to be seen.

(2) JASPER: Lost in the Legion scuttlebutt was the big piece of news from UK this week that Derrick Jasper has begun practicing lightly. He is now working with the team and slowly making the steps to bring himself back from the microfracture injury. This is huge news and may be the biggest information to come from the program in some time. Most around UK, who just a month ago were convinced Jasper would not be back all season, are now targeting early January for a return to the court. What a huge boost this would be to the team, giving the Cats more options at a position that has now suddenly become very thin. With all the talk about Legion, it is important to remember that the Cats have two high quality guards on the bench that arent playing. Their return will have a more lasting legacy on this program than whatever decision Alex ends up making.

(3) LIGGINS TIME: The Marshall County Hoopfest gets under way tonight, bringing back the event that has become legendary around the Kentucky Sports Radio family. Whether it was our rough attempt at calling AJ Stewart’s game last year, the neverending trip to Benton from Lexington or my famous altercation with the cafeteria lady, the Hoopfest provided a number of great stories last year. Unfortunately we will not be making a return trip, but the field is great once again. Most importantly for UK fans, DeAndre Liggins will be making a Bluegrass state appearance on Saturday to debut before the Kentucky faithful. I expect lots of Kentucky Sports Radio fans will be there and we hope to get great reports on his game. With Findlay Prep (Liggins’ team), Oak Hill and Michael Jordan’s kid (toting dad along) there, Benton is THE place to be this weekend. Just dont ask to flip the television to another game in the hospitality room…..it makes folks really mad.

More during the day today, including the news on Legion as it comes in and Mosley’s great preview of the Indiana game….