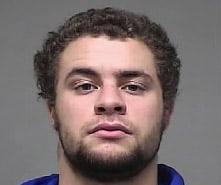 Former Kentucky defensive back Daylen Hall was dismissed from the UK football team back in February for a violation of team rules. That ranks up there with giving Matt Roark the starting quarterback job against Tennessee as one of the best moves Joker Phillips has ever made.

Hall is facing felony assault charges after he allegedly punched a deputy sheriff at the Trinity/St. X lacrosse game over the weekend. The 18-year-old Hall was among a group of students who were asked to leave the field after the game when the alleged punch went down. According to WDRB, the game’s PA announcer came over the intercom and warned the group that they would be arrested if they didn’t return to the bleachers. When the officer grabbed Hall by the shirt to escort him off the field, Hall punched him, breaking his glasses and cutting his face.

An arrest warrant was issued after Hall fled the scene and he was arrested early this morning.

He has been charged with third-degree assault of a police officer.

66 Comments for Dismissing Daylen Hall was the right move