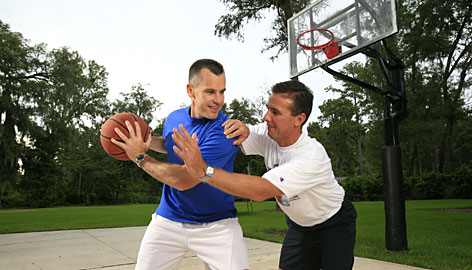 Five minutes after this picture was taken, these two enjoyed a picnic and each other’s firm embrace.

Do you hear that noise? That’s the sound of Florida athletic director Jeremy Foley pumping his fist and shouting “Cha-ching!” after the Gators signed a massive 10-year television deal with Fox Sports, worth just under $10 million per. The deal pretty much drops a nail into the coffin of the rumored SEC channel and guarantees us another likely Raycom/CBS partnership with the occasional ESPN/ABC game.  Sweet.

I’ll give mad props to Foley for piecing together a deal for his school, but a part of me died inside knowing that Raycom and it’s never-ending promise to improve its telecast quality will again be dishing out Cats games this year. I’m tired of being Raycom’s Tina Turner and at some point, these beatings have to stop, right? See you in 2018 when we’ve got a shot at the SEC Network again.

Here is the programming that you were likely to receive this year from the what was going to be the best damn network in the world:

Pearls of Love: The Tennessee coach retreats to a mansion with 20 barely legal trailer park beauties and, with the help of his son, Stephen, picks the one that he sees himself spending his life with. Contestants will be subject to challenges like “How long was he in the tanning bed?” and “Phone-tapping 101”.

Donovan’s Place:  A serious look at one man, Florida coach Billy Donovan, as he takes several unathletic, caucasion d-bags under his roof and tries to lead them through a life of taunts, attacks and blocked dunk attempts. With touching moments and tears galore, audiences will be captivated. The pilot, called “No, Matt Walsh, they weren’t calling you happy”, scored high ratings and tugged at the heart.

Misdemeanor or Felony? – A cutting edge TV game show where contestants will test their legal knowledge by guessing the severity of the charges leveled against Tennessee, Georgia, Arkansas and Alabama football players.

Mercy: Kentucky coach Billy Gillispie goes head-to-head with SEC football and basketball coaches in a steel cage match until one begs for mercy. An ongoing series, the coach that lasts the longest in the ring receives a replica SEC championship ring. Because that is, after all, the only way in hell they’ll get one while he’s at UK..

Oh, what could have been…