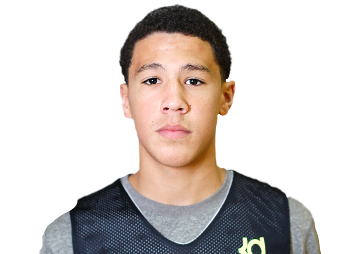 Despite a report from Adam Zagoria saying otherwise, 2014 shooting guard Devin Booker will wait to cut his list to five until after this summer. Just to refresh your memory, Booker is a 6’6″, 180 lb Mississippi native is ranked four stars by Rivals, described as a sharpshooting marksman, averaging 30 points a game in his latest high school season.

Booker has spoken recently about the schools recruiting him, noting that Kentucky is impossible to overlook:

“You can’t ignore what Calipari is doing right now,” Booker said. “He’s winning national championships and putting players in the league, so that’s what you want to see. That’s everyone’s dream to play in the NBA if you’re at this high level. So Kentucky, that’s a good look.”

Booker plans to visit Kentucky this summer and Michigan this fall before making his final decision.

8 Comments for Devin Booker Will Cut His List After Summer