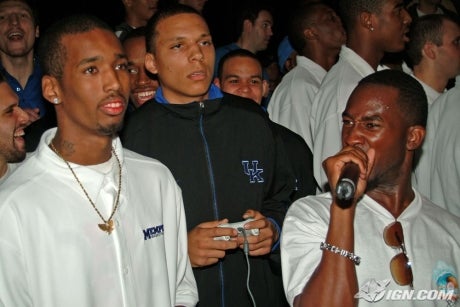 How many times have you watched a game where a basketball team has scored 92 points and thought to yourself, “hey that guy that only scored 3 points….he is the most important player on the court!” Unless you are fond of watching old Jason Kidd games, the answer is probably not that often. However if you are one of the fortunate few who got to see the Kentucky game vs Florida International, you would agree that Derrick Jasper was the most important player on the floor for the Cats.. Even though DJ scored the same number of points as Mark Krebs and one less than Mark Coury, he controlled the action at every point he was in the game. He set up the offense and provided the right pass to the right person at the right time. He did something that seemingly no one else on the team can do effectively….that is feed the post to Patrick Patterson, in order to allow him to dominate the low block. And his size helped him finish with 10 rebounds, a number that is crucial to the Cats success with a four guard lineup.

Along with many Cat fans, I was concerned when Derrick Jasper checked in and played against San Diego. He looked a step slow, seemed a bit tender on his foot and grimaced often while running up the floor. But 48 hours later, we saw a different Jasper and one that Kentucky fans have been clamoring for all year. His quickness was improved and he immediately made the team more balanced and less individualistic. IF the Cats began a season turnaround on Monday, which of course remains to be seen, the reason is easily clear. Derrick Jasper is the most important three point scorer in recent memory and could be the key to making something out of the 2007-2008 season.