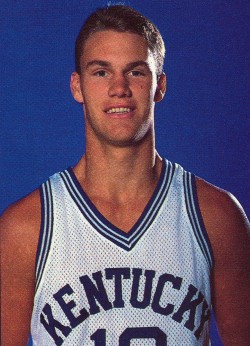 He was one of “The Unforgettables, he’s from Mason County High School, and today he turns a cool 43 years old. He’s Deron Feldhaus and this week’s Friday edition of the News and Views are all for him. Feldhaus spent five seasons at Kentucky from 1988-1992, playing in a total of 124 games after redshirting in his first year. He scored a total of 1,232 points for the Wildcats and was part of that memorable team that made it to the 1992 Regional final of the NCAA Tournament. Today, the Maysville product is living back in his hometown and running the Kenton Station golf course that he is part owner of with his father and step-mother. The golf course is his life these days but he’ll always be an unforgettable Kentucky basketball legend.

News? Views? Let’s get it then.

— Let’s lead off with some potential big news for Kentucky fans on the basketball recruiting front. Khem Birch, a 6-foot-9 freshman power forward, could be transferring out of Pittsburgh. Birch is reportedly unhappy with his playing time in Jamie Dixon’s system and he wants out. His departure is all rumor at this point but those in the Pittsburgh media believe it’s bound to happen and Kentucky could be a possible destination. You may remember Birch as the big man who put on a show in the McDonald’s All-American game last year. He scored 15 points with 10 rebounds, and blocked six shots for the West team that included Anthony Davis and Kyle Wiltjer. ESPN Recruiting ranked Birch as the No. 1 center in that class (ahead of Andre Drummond) and two of the three major recruiting services ranked him as a top ten overall player for 2011.

Before you get your hopes up, remember that Birch is still on Pitt’s roster for now and he’ll get a flood of offers if and when he leaves the team. Plus a lot of basketball recruiting Twitter accounts are refuting the rumors that he is heading to Kentucky. One Pitt beat writer went as far to say that his source told him John Calipari had to be told who Khem Birch was on Thursday night. I won’t pretend to be in the know on this one but I don’t believe for one second that Calipari doesn’t know who Khem Birch is.

We’ll keep following this one on Friday (Pitt has a closed practice in the afternoon) and keep you updated as we hear more. Like I said, don’t get your hopes up just yet. It would be a HUGE get for next year’s Cats, though.

— Speaking of huge gets for Kentucky next season, UCLA is strong in the hunt for Shabazz Muhammad. In an exclusive interview with Five Star basketball, Muhammad talked about the possibility of turning the Bruins around in 2012-2013. “I’ve been watching them this year, they’re really still struggling and I hope they can pull together,” he said. “I think with me, Kyle and Jordan, if I was to go there it would be a great combination, and Kyle’s a really good player. So is Jordan.” The Kyle he is referring to is Kyle Anderson, the No. 2 player in America on Rivals.com’s 2012 board. Anderson committed to UCLA in September and is very close friends with Shabazz. The two have been talking about playing together in college for a long time now. If Shabazz ends up at UCLA, Anderson will be a very big part of the decision. Their friendship, UCLA’s location on the West coast and Adidas brand makes Shabazz the toughest challenge for Calipari since he has been at Kentucky. I still believe.

— One kid Coach Cal has already locked up for next season is drawing attention from Naismith voters. Alex Poythress was one of six seniors named to the Naismith High School Player of the Year watch list. The Naismith Awards national voting academy, made up of basketball writers around the country, made the selections and announced the finalists on Thursday. The winner will be announced on March 22. Poythress is up against Shabazz, Kyle Anderson, Brandon Ashley, Marcus Smart, and Isaiah Austin. Austin Rivers won the award last season.

— A piece of disappointing news out of Sacramento regarding the health of our boy Chuck Hayes. The Kings released a statement about Chuck’s new medical complication:

“A recent stress echo test performed on Kings’ center/forward Chuck Hayes revealed an abnormality which will require further testing this evening and tomorrow. An update will be provided as more information becomes available.”

That’s all we know for now, unfortunately. This “abnormality” better not affect the Cousins/Hayes duo in Sac-Town this season. I’m pumped.

— Did you watch the Falcons-Jaguars game on Thursday Night Football? I didn’t either but I did happen to land on the NFL Network just as Corey Peters crossed the end zone for Atlanta. The former Kentucky defensive tackle scooped up a fumble and took it to the house for his first career touchdown. Peters was named Man of the Year for the Falcons a few weeks ago, which puts him in contention for the Walter Payton Man of the Year Award given to the NFL’s best guy on and off the field. Corey has always been a class act and now he’s turning into one of the NFC’s top defensive lineman. Be proud of him, Big Blue Nation.

— I’m trying my hardest to avoid the Jerry Sandusky situation but it continues to be one big circus. The most recent goof came on Thursday when the newest attorney on his legal team threw out the worst defense in the history of the judicial system by saying his client was only teaching the boys how to properly shower. Un-be-lieve-able:

“Teaching a person to shower at the age of 12 to 14 may sound strange to some people, but actually people who work with troubled youth will tell you there are a lot of juvenile delinquents and people who are dependent who have to be taught basic life skills, like how to put soap on their body.”

How pathetic. I’m not touching this one.

— Sam Hurd of the Chicago Bears better start assembling a legal team of his own. In a story that will certainly get much uglier over the next few weeks, Hurd was arrested on Federal drug charges after he told an undercover agent that he was interested in buying 10 kilos of cocaine at $25,000 per kilo and 1,000 pounds of marijuana at $450 per pound. Expect other NFL players to start dropping off soon as police claim to have a list of the players Hurd distributed to and the list is in “double digits.” The 26-year old Hurd signed a $4.15 million contract with a $1.35 signing bonus with the Bears in the offseason. I’ll never understand why some professional athletes do the things they do.

— We’ll end on a good note and big congratulations to Andre Woodson for earning his college degree. The former Kentucky quarterback will be walking across the stage to receive his bachelor’s degree in community communications and leadership development. Woodson came back to UK this semester to serve as a grad assistant on Joker’s staff while finishing up classes he missed out on when he was busy upsetting LSU, Georgia, and Louisville.

That’s all for now. Tune in to the KSR radio show in the morning when I join Matt to talk about everything going on around the world of UK.