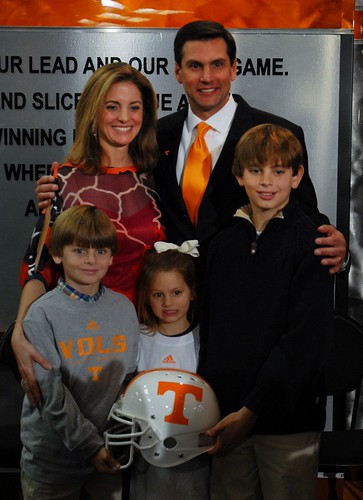 Most coaches with the resume of Derek Dooley might just be content to be allowed in the building at Tennessee, but the Vols new head man is going on the offensive and, to his credit, doing it in a less douchey fashion than his predecessor.  Interestingly, though, that douche is exactly the target of Dooley’s ire.  Snatching up USC transfer Malik Jackson and stealing the #1 punter in the nation out from under the nose of Lane Kiffin (HUGE news in Knoxville) were the most recent and most public blows thrown in what Clay Travis has dubbed a “Cold War-like” tension with USC.  The one that went unreported, though, might just be the best.

Bruce Feldman of ESPN reported today that after USC’s NCAA sanctions were handed down, allowing any junior or senior currently on the Trojans’ roster, Dooley faxed a note to USC listing every single player as a target of the Vols.  Suck on that, probation riddled Lane Kiffin.  It was a tactful nerd-fighting move that, although it might lack actual substance, the circumstances and message behind it was as obvious as getting kicked in the junk from a steel-toed boot.  And, if you ask me, college football needs more of that.

Derek Dooley, though I wish you the most miserable career in the history of Tennessee football, you’re one hell of a nerd-fighter and I can respect that.  Well done.