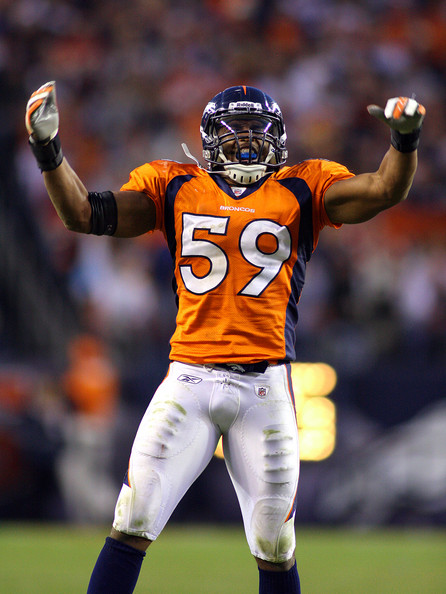 If you don’t fall into the category of every other person I’ve met in Kentucky–who either loves the Bengals, Colts or Steelers, then perhaps you can join me in hopping on the Denver Broncos bandwagon following this year’s 2012 NFL Draft. Not a Tim Tebow fan? Not a problem. Tebow, once a player who caused people to either love or hate the Broncos, has moved on to the Jets. Now we as Kentucky fans can choose to focus on the fact that the Denver Broncos have 4 former Kentucky players on the roster: Jeremy Jarmon, Wesley Woodyard, Jacob Tamme and most recently, Danny Trevathan. Not only can we rally behind 4 Kentucky players all finding themselves on the same NFL roster, but they were all beloved former Kentucky players.

Outside of a player such as Randall Cobb, Jarmon, Woodyard, Trevathan and Tamme are four of the more likable Kentucky alumni football players. All four were positive members of their respective teams while they wore the blue and white. Woodyard and Trevathan were perhaps two of the best to ever play their position while at Kentucky. With four likable Kentucky players on the Broncos roster, can Denver now become Big Blue Nation’s adopted NFL team? For those Kentucky fans who already have intense loyalty toward one team or another, can Denver at least become “that team you cheer for when your own team isn’t playing?” I don’t see any reason why not.

I have no intense loyalty to any one NFL team, so I plan to adopt Denver as my new team. Four of my favorite UK players in recent memory on 1 team? I’ll take it. Where can I buy my Broncos jersey?