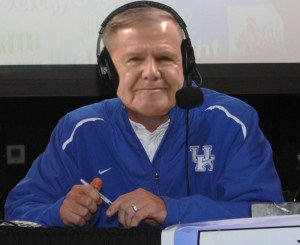 If you listened to the radio show today, you heard a caller reveal that Joe B. Hall said on his own radio program that Denny Crum has given his word to participate in the UK Legends game at the Yum! Center August 16.  A quick trip over to the Louisville Meltdown Center seems to confirm that did occur, meaning it’s officially time to look forward to the two coaching legends joining each other on the sideline.

If you’re a Kentucky fan, that is.  Not surprisingly, Lousiville fans don’t seem to be to supportive of their legendary former coach rubbing elbows in their city with the Commonwealth’s team.  Honestly, I don’t blame them.  We talked a bit on the show about whether or not there was a bizarro version of this that would upset Kentucky fans and failed to come up with any such scenario.  You’re free to brainstorm on your own below.  But that’s the difference in Big Brother and Little Brother.  Kentucky’s history could fill bookshelves and the legendary players and coaches that have walked through Memorial Coliseum and Rupp Arena is lengthy.  Meanwhile, Louisville’s history is about as deep as Tucker Max’s Twitter account.  And that is what makes the participation by Crum so significant.

For all the accomplishments of Darrell Griffith, Pervis Ellison, Felton Spencer, DaJuan Wheat, Terrence Williams or whoever you want to throw out there, Denny Crum is Louisville basketball.  When the program had swagger, it was because it had Crum.  When the program was hanging banners, it was because it had Crum.  When it was seriously considered as a national power, it was because it had Denny Crum.  And on August 16, Denny Crum will be participating in a game that is essentially for Kentucky fans.  So do I blame them for being upset for the ultimate Big Brother slap across the face?  No.  But you’d think they’d be used to it by now.  This is the reality of this rivalry and it’s not changing in the forseeable future.

In the words of Steve Polychronopolous, “Deal with it”.