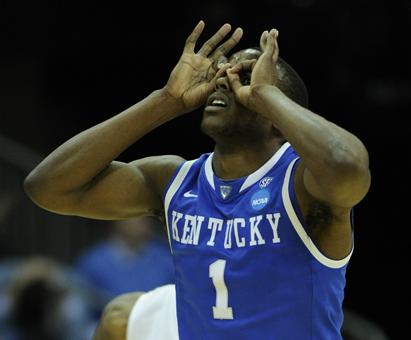 Darius Miller is caught in the middle of a three-point shooting slump and he needs to find his way out of it soon. Miller has only made three of his 17 three-point field goal attempts in the last four games. If you took away his 4-for-5 performance against Portland, Darius would be just 4-for-28 on the season from beyond the arc. Those are VERY uncharacteristic numbers from the guy who shot 44% last season.

He has had a lot of open looks this year and I’ll admit to holding up my goggles before he releases the ball on a lot of those. Normally, a wide open three-pointer from Darius is going in. Kentucky fans are anxiously waiting for him to get back in that groove.

I don’t think we have any reason to worry about this long-term. Shooting slumps happen. He’ll be a’ight.

On second thought, why shoot threes when you can do this?

27 Comments for Darius is rushing his shot