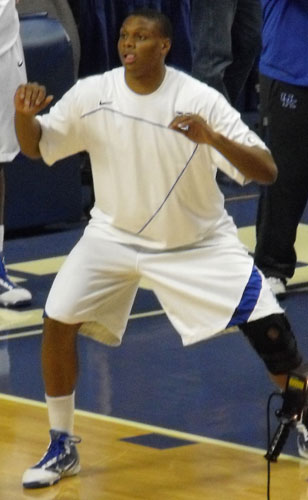 There have been bad debuts before and people have bounced back (hat tip to Calipari). Anyone who saw the first week of the Jimmy Kimmel Show, where every guest was either Adam Corolla or the Armenian Comedian, would have never imagined it would still be on the air seven years later. But as bad as those in the past may have been, I am not sure that we have seen too many debuts worse than the one Daniel Orton had today. Take a look at his numbers:

However the numbers dont really do it justice. If you watched the game then you know, Orton may not have been able to put on a worse game if he tried to do so intentionally. Part of the problem was his play. He looked a step slow, was lost on the court, committed multiple moving screens and was beaten repeatedly on the defensive end by (of all people) Josh McRoberts. While in the game in the first half, his team was crushed and his inability to box out caused a number of offensive rebounds that led to baskets. But that wasnt even the worst part of the day. He also repeatedly pouted when he didnt get the ball and on the FIRST OFFENSIVE POSSESSION OF THE GAME, yelled at a teammate when he wasnt give the ball 18 feet from the basket, leading Bomani Jones to call me and say, “yo, this Orton thing is not going to end well.” He ended the game by getting tangled up with McRoberts, attempting to throw an elbow and being ejected (along with McRoberts) for fighting. The entire scene caused the NBA TV announcing crew (who are just terrible, but try to say something positive about everyone) to call the performance a “total and complete disaster.”

Now its one game. In Yao Ming’s first Summer League game, he didnt even score. He will play tomorrow and hopefully do so well that we wont even remember this. But unfortunately, this game showcased all the problems that have been par for the course for Orton recently. His play wasnt up to par, his attitude was poor and his work ethic and hustle was questionable. I pull for Daniel Orton because I do remember the kid I met when he was in high school, who seemed like such a polite and thoughtful young man. However recently he has made one poor decision after another off the court. And at least in his first debut wearing a Magic uniform, that showed itself again on the court.

But as Beisner said, “hey at least he scored as many points per game as he averaged in college.”