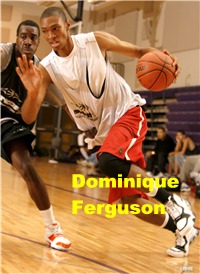 You may have missed it last night as it was on television at the bizarre time of 5 pm on a Monday afternoon, but Dominique Ferguson played on tv last night for his Lawrence North high school team. Ferguson had 18 points and apparently looked great (I didnt see it) in the effort. I was told by someone who watched the whole game that the real revelation was not his point scoring, but how well he handled the ball, a skill that makes some compare him to a more interior-oriented Tayshaun. Either way, the game is likely to be replayed, and originally was scheduled to be played this weekend on the CBS College Sports Channel (CSTV). IF you get a chance, check it out as this is one early commitment that will be a star for the Cats in years to come.