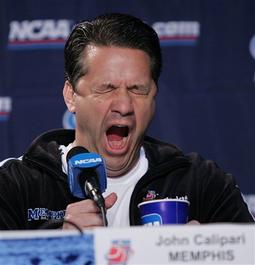 In case you missed it, Calipari was on ESPNU this afternoon right before the AAU game featuring Michael Gilchrist and Will Barton. He shared the stage with a couple of former assistants and said a couple of things to pass along on a slow day….

— He once again suggested that expectations were a bit high for this team and said he cant understand how a team could be considered number one when it is “without its leading scorer from an NIT year.” Of course, Calipari knows that can happen because he has a star in Patterson, a tremendous recruiting class and is following a coach with no clue. But he is clearly trying to play down the expectation game.

— He mentioned Patrick Patterson and Darius Miller as two stars that this team can have this year. I havent heard that type of praise from Calipari before on Darius, but it is a very good sign indeed.

— He again stated his preference for ending the AAU recruiting, a sentiment quickly shot down by the other coaches on the panel. Calipari is right that ending AAU would benefit Kentucky, but it likely will not be taken away because coaches at smaller schools find it to be the one way to see a lot of players in one place, at a reasonable financial cost.

— In the actual game, announcers said Michael Gilchrist was a heavy Kentucky lean, but also mentioned Villanova as a competitor for his services. They also hinted that some believe Will Barton “still needs to be recruited” by Josh Pastner to keep his Memphis commitment. While it remains to be seen if that is true, Barton was very impressive looking in the limited parts of the game I saw, and you can see why he is such a rising talent.