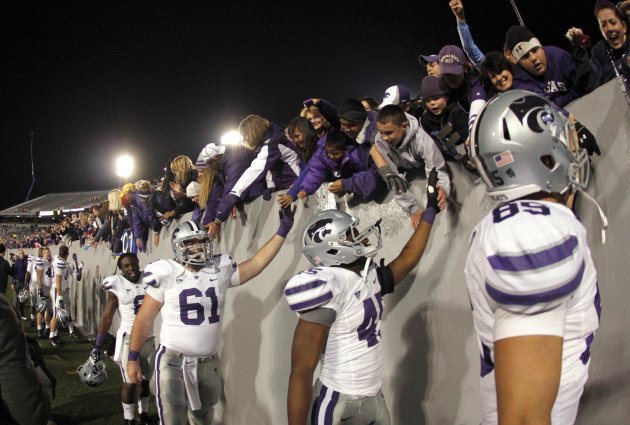 There was a time when Kansas State was probably the worst job in all of college football. That was way back in the year 1989, a year which saw the Wildcats lose every game they played and become the first team in Division I to lose 500 games. It was time for a new direction and that direction came when K-State hired Bill Snyder to become their new head coach. Snyder went on to transform the program amassing nearly as many victories in 17 years (136) as the program had in the previous 60 years. After two losing seasons Snyder retired in 2005 with his legacy apparently in order.

With Snyder gone Kansas stated started to decline and just three years later he was brought back in to lead the Wildcats. The job he has done in his second stint is just as impressive as the first. K-State currently sits at #4 in the polls and controls it’s destiny going forward. Their only ranked opponent over the next five weeks is #15 Texas Tech. If the Wildcats can take care of business and have Oregon slip up, perhaps they will have a spot in the BCS championship game. Unreal to think given the status of the program just 4 years ago.

So how does that apply to our Kentucky Wildcats? With last night’s loss we will not be making a bowl for the second straight year and the program is at a crossroads. The team has been in a backwards trend since Rich Brooks retired three years ago. Joker has one year left on his contract and in order to recruit for the future would require and extension. The facilities are out of date and in need of some major renovations. The state doesn’t produce the talent needed to compete at the SEC level. Many of the problems we face are problems that Kansas State has overcome. Here’s how they did it and how Kentucky can use their methods as an inspiration:

Current Heisman front-runner Collin Klein only held offers from Colorado St. and Kansas St. when he made his college choice. Sounds a little bit like our own under recruited Max Smith. As profiled in an article on ESPN K-State has long looked for under-the-radar guys, transfers, and developing talent. The Cats have done a good job of finding under the radar guys over the past 6 years but the development side has struggled a bit. Kentucky will probably never out recruit the other giants of the SEC. Much like K-State doesn’t out recruit Texas, Oklahoma, or half of the other teams in the BIG 12. However K-State is proving you can have success by cultivating talent, not just 5-star players.

K-State plays in a stadium that is both older and smaller than commonwealth. The difference with their facilities is that they have kept them up to date and fresh with renovations. Just in January of this year the school announced a 75-million dollar project to bring the stadium up to date. Once Vandy is finished with their current set of renovations then Kentucky will have the worst facilities in the SEC. In just a few short months we will know if the University is committed to building the program or simply content with the current state of affairs.

Look at any great football team and you are sure to find a great leader. The jury is still out on Joker. He has had some signature wins such as beating South Carolina/Spurrier and Tennessee for the first time in my lifetime. He has had some close calls like Georgia this year and last and Auburn his first year. And he has had some moments that should never happen like the loss to Western. If Kentucky does get a new head coach hopefully they can find someone that can instantly come in and change the culture of the program. A coach like Snyder.

Maybe Kentucky is destined to be a bottom dweller of the SEC but if Kansas State can be transformed into a national title contender then I see no reason why the same thing can’t happen at Kentucky. Rome wasn’t built in a day but Kentucky may finally have the chance to really invest in the future of the program. If they do that then perhaps Kentucky too can transform from laughingstock to competing with the best of the best.

42 Comments for Could UK Ever Compete For a Title? K-State says They Can