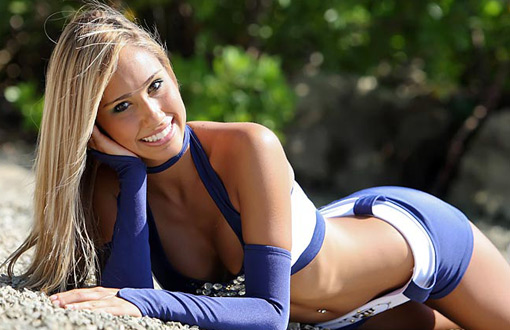 Vanessa wants you to watch her Panthers of FIU tonight.

We don’t have a whole lot to work with this evening on the college basketball schedule, but that doesn’t mean you have permission to watch George Balanchine’s The Nutcracker Live from The Lincoln tonight. You’ll get your man card suspended for that.

Here are your nationally televised games this evening….

It has been an ugly, ugly first half of the season for Tennessee and it could get even uglier tonight when the Volunteers (3-5) play on the road at Charleston. The Cougars (7-1) upset Tennessee by 13 points in Knoxville last year and are sitting at 4-0 at home so far this season.

Tennessee is coming off a 74-70 home loss to in-state opponent Austin Peay of the Ohio Valley Conference. Peay entered that game at 1-9 on the year with a win over Arkansas State.

Charleston has had 11 days to prepare for this one. The Cougars last played on Dec. 3 when they needed two overtimes to clinch a two-point win over Chattanooga, Kentucky’s next opponent.

Tennessee is bad and Charleston is well-rested.

Hide your kids, hide your wife. Cincinnati basketball is taking the floor again. The Bearcats (5-3) will be without starting center Yancey Gates tonight after his “incident” in the Xavier game on Saturday. Gates is Cincy’s leading rebounder and the team’s second-leading scorer. Three reserves are also suspended for their participation in Suckerpunchgate.

Wright State (4-6) isn’t a great team but their deep bench could be an advantage tonight against the depleted Bearcats. The Raiders will likely use 9-10 guys to try to push the tempo on Cincinnati. The only problem is Wright State’s offense is terrible.  They rank 326th out of 338 Division I teams in scoring offense and they scored a whopping 34 points against Air Force last Wednesday.

I don’t know why, honestly. Cincinnati still has one of the best defense’s in the country without Gates and they’re 7-0 all time against Wright State. But Raider Nation was already fired up about a nationally televised game against a Big East opponent and the fight from Saturday will just add to the hype.

I think Wright State keeps it close and maybe even gets the W.

Maryland (5-3) plays host to the Fightin’ Isiah Thomases tonight in the primetime game on ESPN. Maryland, fresh off a three-point victory over Mount Saint Mary’s, will look to contain the unstoppable force that is Dominique Ferguson for the Golden Panthers. The sophomore Ferguson is a former Billy Gillispie commit who reopened his recruitment when Coach Cal came to town. Don’t act like you don’t remember him. You wrote on his Facebook wall.

Florida International (3-6) is still trying to figure things out in its first season without Alex Legion, but DeJuan Wright helps ease the pain with his team-leading 17 points per game.

Alex Legion’s mom told me so.