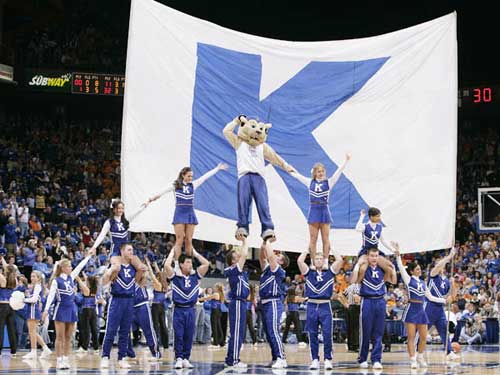 Today I Learned:  If you Google Image Search ‘college basketball,’ three out of the top ten pictures feature Kentucky.  Someone find out how to make it nine out of ten.  With the tenth being Dom Papa.

What is widely acknowledged outside of the state of Kentucky – but rarely inside – is that few people really care about college basketball until after new years.  I mean sure, die hards watch every game.  Students probably watch most of the ones their school is playing in.  Alumni will catch the big games.  But it doesn’t draw the kind of attention that college football does – particularly at the start of the season.

Which, by the way, the start of the season is tonight.

But you probably knew that, assuming you’re also the kind of person that checks KSR after dinner, after dessert, and before bed.  So good on you.  But for the majority of the public (and apparently Pat Forde,) today is just another day, and not the beginning of the greatest five months of the sporting year.  Particularly because the basketball gods set us up with games like URI vs Pitt, UC Irvine vs Illinois, and Navy vs Texas.  Not a lot to get excited about.

However, according to everyone’s favorite jilted lover from Memphis Dan Wolken, Calipari once threw out the idea to start the college basketball season by replaying last years elite eight on neutral courts (as Fake Gimel called it, the Repeat 8.)  Now I couldn’t find the quote that attributed the idea to Cal, and I’m pretty sure if you told him he had to play West Virginia tonight he would be pretty distraught, but no matter who said it, I think it’s a pretty great idea.

As a college basketball fan, it would be exciting to tune into four games that would likely demonstrate what some of the big names were bringing to the table this year, and could ignite some rivalries (you don’t think the WVU/Kentucky rivalry would get huge?)  Plus this isn’t college football.  One loss doesn’t get you kicked out of the hunt for the national championship, and it would give last years elite eight great publicity for the coming season.  Not to mention you would have a litmus test for improvement over the season, in case the teams run into each other again in the real tournament.

I’m sure there are reasons not to do it, but I can think of a million more why I don’t care to watch Pitt curb stomp Rhode Island tonight.

What do you think?  Does college basketball deserve a better tip off, or are you content to watch the big names eat cupcakes for a month?

(Just as soon as I write this, I see Eamonn Brennan wrote the same thing over at ESPN.  I would link to him, but I think we’re supposed to hate him or something.  Boo Eamonn Brennan!  Stealin’ my ideas out of my head and all.)