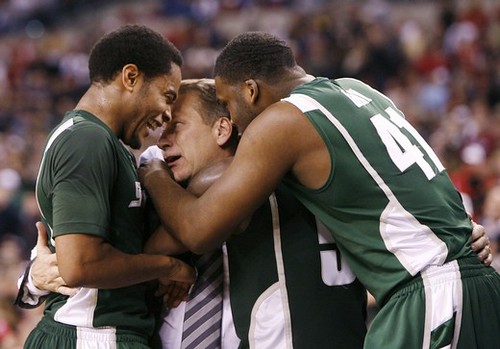 I know we usually focus on UK basketball exclusively around these parts, but more news items are popping up regarding the Cleveland Cavaliers and their interest in Tom Izzo. An assistant coach acknowledged that Izzo met with the team Tuesday where he informed them that he is talking to the Cavaliers and that the players should focus on their studies. Izzo had previously claimed he wouldn’t leave MSU until they won another championship and as recently as last week he turned down the Chicago Bulls, but the Cleveland job seems to have piqued the interest of the Spartans HC. Obviously, the decision that LeBron James has yet to make is a big determining factor in Izzo’s decision.

While I’d hate to see Izzo leave the ranks of the college basketball, him taking a spot in the pros means one less suitor for our coach’s services and that, selfishly, is a good thing. I know we can all empathize with the MSU fans and know what they are going through right about now but the only thing I have to say about that is this: Better them than us.