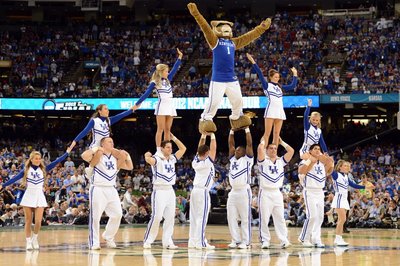 As the offseason begins to draw to a close there isn’t much time left to get every preseason list/ranking/prediction in before we are once again able to watch glorious sports. Today Jeff Goodman did just that as he ranked his picks for SEC power rankings. The article is insider but all you need to read about is the number one team as it features the Kentucky Wildcats. Here’s what Jeff had to say:

The million-dollar question is whether the 2013-14 edition of the Wildcats will be more like the national title squad two seasons ago or the one that earned a trip to the NIT last season. Just two holdovers remain from last season: talented 7-footer Willie Cauley-Stein and combo forward Alex Poythress, who could wind up in a reserve role after averaging nearly 26 minutes per game as a freshman.

The incoming class ranks No. 1 in the nation and boasts five players ranked in ESPN.com’s top 10: power forward Julius Randle (No. 3), point guard Andrew Harrison (No. 5), center Dakari Johnson (No. 7), small forward James Young (No. 8) and shooting guard Aaron Harrison (No. 9). It’s a young group, and leadership and chemistry will likely determine whether another banner is hoisted to the rafters at Rupp.

Kentucky is the unquestioned favorite to win the SEC for the third time in five seasons under Coach Cal. While you can’t read Jeff’s picks unless you are an insider you can still check out mine. Here’s how I think the top five SEC will shake out.