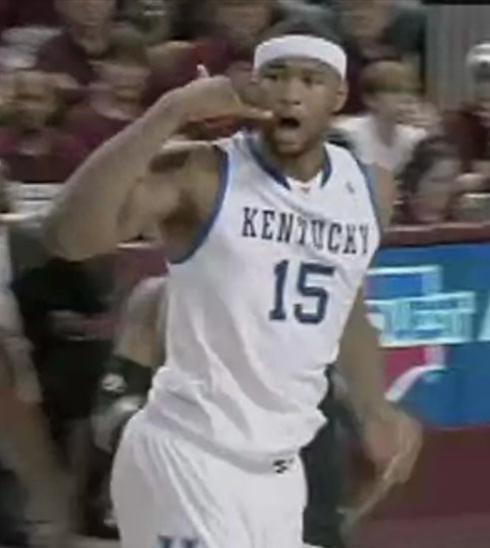 In front of a rowdy (and unattractive) record crowd at The Hump in Starkville, John Calipari’s young team showed the kind of focus and toughness that championship teams have as they squeezed out a win on a night when the bounces were clearly going the other way for most of the game.  The Cats shot 41% from the field and an anemic 17% from the three point line, but used rebounding (a +21 advantage) and shotblocking (12 total) to knock off a very fierce Mississippi State effort.

With all eyes on DeMarcus Cousins, he did not disappoint, reveling in the extra attention and putting up 19 and 14, despite fighting double teams all night.  On a night where he could have easily lost his temper and when the mood was right for his emotions to get out of control, he maintained his composure while displaying much-improved moves in the post and outstanding passing out of the post.  His performance was complemented by John Wall’s near triple-double (18 points, 10 boards, 8 assists), which came with a side of “And 1” and shot-blocking in OT.  A seemingly reinvigorated Patrick Patterson contributed 19 points and 10 rebounds and even Darius Miller (9 points, 2 boards, 2 blocks) and DeAndre Liggins (defense and a lot of jacked shots) got in on the action.

All in all, it wasn’t a pretty win but it was the type of gritty mid-February performance that inspires confidence in a team that started the year young and now appears to be evolving into a formidable veteran squad.  We’ll have more shortly but, in the meantime, revel in the joy that comes with 25-1.  And be grateful that you aren’t a Mississippi State fan.  There aren’t many things more embarrassing than that right now.

(1) From a basketball perspective, this was as good of a win as this team has had all season. Mississippi State wasn’t the best team Kentucky has played and it wasn’t the most flawless game they’ve had, but this was still the best win. The crowd at Mississippi State was as hostile as any they’ve faced this season (even with text messages and water bottles excluded) and they were getting what seemed to be all the bounces (and banked shots). It seemed to be one of those “there was just nothing we could do” nights at The Hump. Instead, the Cats used a 7-0 run in the final 2:44 to tie the game at 67 and force overtime, where they would put the nail in the coffin. Good teams lose these games. Great teams win them. Tonight, Kentucky made their most emphatic statement yet that they’re not just an assembly of national title talent. They’re potentially a national title team.

(2)  If ever there was a situation for DeMarcus Cousins to lose his temper, do something stupid or have an awful game, this was it.  To his credit, though, Boogie displayed the total package of a franchise player in front of a very hostile crowd.  The crowd taunted him with chants and the players baited him with elbows and pushing and Cousins let his play do his talking.  He’s been nipping at John Wall’s heels for National Player of the Year and making NBA scouts drool with his phenomenal passing from the post and his offensive game, which is becoming more polished by the day.  Tuesday night, though, he displayed the type of composure people were questioning and, in the process, made himself an even more impressive prospect.  A flawless (save for a few fouls) game for Boogie.

(3)  Ladies and gentlemen, will you please rise and welcome Patrick Patterson back into the fold?  I got on him pretty bad a few weeks ago about him seeming to let a lack of offensive touches affect his intensity on the glass and he was simply a beast Tuesday.  Patterson finished with 10 boards, the first time he reached double digits since 12/23, with six of them coming on the offensive end.  Patterson’s rebound total didn’t benefit from more time in the paint.  It was all effort.  Patterson busted his tail on the glass and it played a major part in how UK was able to make up for losing the turnover battle and shooting a poor percentage.  Great game from Patrick.

(4)  Blah, blah, blah, blah, John Wall, blah, blah, blah.  Dwight Who?  Shaq What?  There’s only one Superman and he put his powers on full display in overtime with an “And 1” and a superhuman block (free throws could be kryptonite) that sealed the win.  And, dude hit the boards hard again and almost finished with a triple double (18 pts, 10 reb, 8 ast).  I’ll take it.

(5)  As we’ve said all along, Kentucky doesn’t need a whole lot from the “other” wing spot.  They just need something.  Tuesday night, Darius Miller and DeAndre Liggins gave the Cats what they needed out of the position.  Again, it wasn’t much and it wasn’t flawless, but it was what they needed.  Miller had 9 points and 2 blocks and Liggins contributed solid defense and (I’ll get crucified for this because it’s not a stat) made the offense more fluid when he was in the game.  Darnell Dodson was horribly off (so was Liggins’ jumper) but Miller filled in nicely.  Let’s hope it continues.

(6)  I mentiond this earlier but it bears noting again, if only because it was so significant.  Kentucky flat-out dominated the boards against the Bulldogs.  The Cats finished with a +21 advantage (48-27), which made up for losing the turnover battle and having a relatively poor shooting night.  At the half, the Cats had 11 offensive rebounds.  Mississippi State had 11 total rebounds.  The score was still a work in progress, but the message had been sent.

(7)  I mentioned on Twitter today that this was the best shot-blocking UK team of the last 20 years and they didn’t disappoint against Mississippi State.  Kentucky finished with 12 blocked shots and did so without making me lose my mind by allowing offenive rebounds out of attempted blocks.  Falling in love with the block can sometimes be a very bad thing (see Billy Clyde Era) but this team clearly a shot blocking team instead of a team that tries to block a lot of shots.

(8)  Since we won, we can nitpick, right?  How in the world did DeAndre Liggins end up with the final shot of regulation?  Honestly, why was he even on the floor?  Oh well, that’s it.  I’m over it.

(9)  While we’re throwing out complaints, let’s just work this one in there too.  Far too often this game, Kentucky made fundamental defensive mistakes.  The backdoor cut killed them early and the pick and roll (again?!?) hurt them late, but it was never enough to swing the game.  Overall, I thought it was a great defensive effort but there were a couple of lapses.  And I know he’s John Wall and he can make up for it with athleticism, but the old crabby man in me still cringes at seeing him stand straight up on defense.

(10)  With all the chaos on the court after the game, Cal had to be protected.  Did you see who was keeping watch over Coach?  A KSR favorite.

(11)  Now that we’ve got all the basketball out of the way, let’s just make this quick.  Anyone and everyone ever associated in any way with Mississippi State should be absolutely horrified and embarrassed right now.  What started as posters all over campus with DeMarcus Cousins’ phone number and turned into racially motivated hate calls, ended up taking the form of bottles being thrown on the court at the end of the game.  The administration said they’ve reached out to UK to get the numbers from Boogie’s phone in order to find out which one’s were students, which is a nice gesture, I guess.  What they need to focus more on, it seems, is the apparently rampant backwoods buffoonery that is now synonymous with the Bulldog fan experience.  What happened this week with that program is an absolute disgrace and I’d feel nothing short of humiliated if I were a part of it.

Rant over.  That’s it for now.  Like I said earlier, it wasn’t a pretty win but it was the type of gritty mid-February performance that inspires confidence in a team that started the year young and now appears to be evolving into a formidable veteran squad.  We’ll have more shortly but, in the meantime, revel in the joy that comes with 25-1.  And be grateful that you aren’t a Mississippi State fan.  There aren’t many things more embarrassing than that right now.