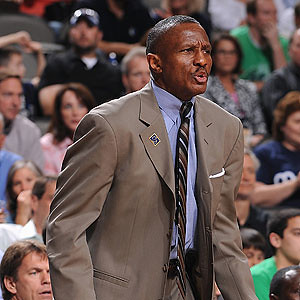 Last week, the Los Angeles Clippers formally announced that Vinny Del Negro would be their head coach. Normally, a bad NBA team making a bad decision wouldn’t be noteworthy on a UK blog, but it just so happens that the second choice was Kentucky’s own Dwane Casey. The Morganfield native is currently an assistant with the Dallas Mavericks and was strongly considered for the HC job in LA (as noted previously by the great Hunter Campbell). Again, normally it isn’t a big deal when a former UK player and assistant gets passed by for a job, but I did catch this snippet on Around the Horn last week from Bill Plaschke (WARNING: Video contains Bill Plaschke. Talking.):

If you don’t want to fill your ear with the Louisville native’s rant, he actually stands up for the former Wildcat guard. Plaschke says that the Clippers had made the decision to hire Casey but the Al Davis of the NBA, Donald Sterling, intervened and made the call to go with Del Negro because of money and his friendship with Bulls head honcho Jerry Reinsdorf. BP thinks that a Casey hire would have made a splash and would have been a big deal for the LAC.

Quite a few people root for Casey around these parts and it would have been nice to see him coaching Eric Bledsoe, but I think Dwane can chalk this one up to unanswered prayers. At the end of the day, even an assistant job with Cuban’s Mavericks is light years better than a top job with that loon Donald Sterling. It would be a far better option to wait on a different team that also drafted a UK point guard, has a much better owner, and employs a coach that probably won’t last too long.