Today begins Pool 3 of the first round of the “Who Wants to be a Blogger” contest. Like yesterday, we will have four contestants, each profiling a different UK footballer. One will be eliminated tonight at 8:30 pm. Today’s judge is Hunter Campbell 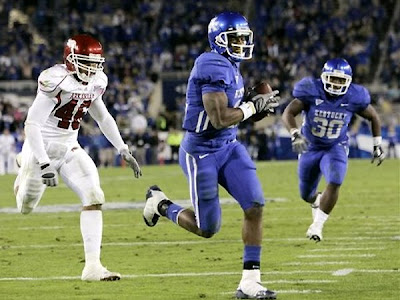 Two years ago the word Cobb probably would not have rendered much feelings of anticipation for Kentucky athletics. Well, just like anything else, “the times they are a changing.” Randall Cobb comes into his sophomore season at UK with a new pecking order of tasks. He’s the on again off again quarterback from last season who we all anticipate to do big things at the wide-receiver position. With a healthy competition taking place for the quarterback spot once again between the youngsters and Hartline it is possible that Kentucky could have a serious threat at the wide-out position in Cobb. Randall Cobb managed two state AA titles in Tennessee as a starting quarterback at Alcoa High School and won “Mr. Football” honors during his tenure there. The same hometown as Lynn Swann, Cobb has a great idol to emulate his future-receiving career. Maybe making the transition to receiver, given his background, “more natural.”

As a receiver, Cobb’s most impressive performance came during the Arkansas game October 18th at home. During that game Cobb caught two touchdowns for 73 yards in a win for Kentucky, over Arkansas, 21-20. It will be important for Cobb to come out in the early part of the schedule with games against Ohio and Louisville and build some early season confidence. He’s already proven with his effort from last season that he has the ability.

Hunter’s take: Casey, what we have here is good. Unfortunately, we don’t have much. Where other contestants are lacking in humor, I found your entry to be fairly lacking in, well, words. Especially in the case of a player like Cobb, a guy everyone is familiar with and who will be a huge part of the team’s success this year, there needed to be something that really jumped out, and I feel like you fell short on that. There’s a lot of potential here and you seem to know your stuff. That said, I don’t know if you gave us enough of a sample to really draw a conclusion about you and that may not work in your favor.