If we’re being honest with ourselves, it’s not hard to see that this isn’t Kentucky’s year on the gridiron. The season started with low expectations, but so far, the Wildcats have failed to live up to even the most modest of them. Halfway through the season the ‘Cats sit at 1-5, with virtually no shot now at making a bowl game. The real question facing Mitch Barnhart and the rest of the athletic department now becomes: What direction does the program go at the end of the year?

On one side, you have an argument that the Wildcats need to start fresh with a new coaching staff. I’ve never been the type that thought talks of replacing a coaching staff during the season was necessary, in fact its more of a distraction than anything. While this year’s team obviously has plenty to worry about on the field, the off-the-field questions about the future of the program are inevitable at this point. After a streak of 5 consecutive bowl games came to an end last season, the Wildcats are in full rebuilding mode right now, and it’s up to the administration to determine if that rebuilding will happen with Joker Phillips  in charge or not. It’s very hard to win in the SEC at Kentucky, and it’s even more difficult when key factors of your team begin dropping like flies out on the field. But at some point, the coaching staff needs to be held accountable for the poor performance of the program the last 2 seasons.

At the same time, as Joker Phillips stated in his press conference today, the Wildcats have played 14 true freshman this season, which if  you follow college football you know, is a lot. The core group of Kentucky’s program are underclassmen, especially on offense where UK has a trio of young quarterbacks who have played significant time this season, along with playmakers like Demarco Robinson, Darryl Collins, Demarcus Sweat, and Josh Clemons (who is redshirting after tearing his ACL last season). On defense, Bud Dupree, Khalid Henderson, and Cody Quinn have all shown flashes of their talent early on in their careers. With such a young nucleus that includes 23 freshman and sophomores on this weeks 2-deep depth chart, its hard to imagine a future where this team’s youth doesn’t grow into a solid team in the coming years. Kentucky’s 2012 recruiting class has been asked for more production than any class in recent memory, and by most accounts, have stepped up and contributed. 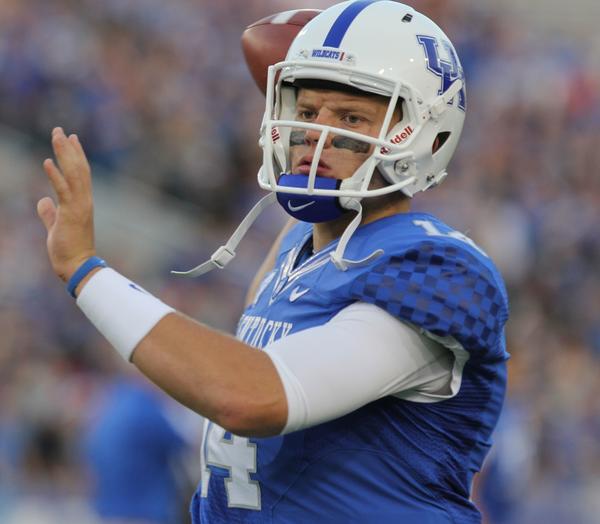 The real question is: Is the promise of a better tomorrow enough to retain Joker Phillips? I realize the sentiment around the fan base at this moment is that a coaching change is inevitable and i’m sure that given the power to be judge, jury, and executioner, more than half of you would have given Joker the axe weeks ago, but it’s a real question. My problem with Joker Phillips has never been with personnel, ever since Rich Brooks arrived at Kentucky, the caliber of player has risen dramatically at UK, rather my issue with Joker has always been in game-planning, in that more often than not it seems that Kentucky is playing not to lose, rather than to win. No matter what the decision made is, a decision is going to have to be made, and I’m glad I’m not the one that has to make it. With each success of the underclassmen, it becomes tougher. If Joker is removed, do any of those guys leave? If he remains the coach, is he competent enough to develop their talents into a cohesive unit? Or, on the other hand, will the promise of talented young underclassmen be Joker’s downfall, because that surely would be a great selling point to start with to entice a big-name head coach to come to Lexington.

For now, let’s take solace in the fact that…. nevermind, I have nothing to put here. It’s definitely not our year on the gridiron, just grit your teeth and take it. Maybe next year.

63 Comments for Can The Underclassmen Save Joker’s Job?