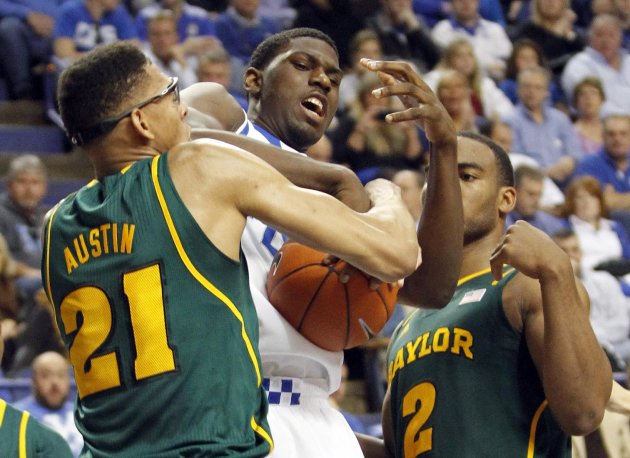 It took 55 games but John Calipari finally dropped one in Rupp Arena, ending the longest home winning streak in the nation. (The streak included one game at Memorial under that Billy G guy.)  The Baylor Bears came into Rupp looking for Elite Eight revenge on Saturday afternoon and they found it with a little help from an unkind Kentucky rim.  Kentucky fell to Baylor, 64-55, the second-lowest UK scoring total in the Calipari era.  The two-game losing streak is only the second time Calipari has lost back-t0-back games since being at Kentucky.  It’s been a rough stretch for Big Blue Nation, but Cal still likes his team.  He does.  He said it again on Saturday.

You’ll have trouble finding a shooting performance anywhere in the country as bad as the one we just witnessed in Rupp Arena.  The Cats were as cold as a cup of Orange Leaf frozen yogurt on Christmas Eve.  Kentucky went 21-for-71 from the field (29.6%), 4-for-22 on three-point attempts (18.2%) and an inexcusable 9-for-18 (50%) at the foul line.  It doesn’t get much worse than that, folks.  It really doesn’t.

Calipari said his team’s shot selection stunk. “I don’t know what you can say,” he said in the postgame press conference.  “We took some horrendous shots.”

Leading the way for Kentucky in the missed shots contest was none other than Kyle Wiltjer, the team’s lights-out shooter.  Wiltjer had yet another awful outing, missing all but one of his 11 field goal attempts.  Kyle is now 3-for-22 from beyond the arc in Kentucky’s last four games after missing a career-high eight attempts against Baylor.

After the game Calipari questioned Kyle’s decision to fire the step-back jumper late in the game.  He sarcastically said, “We shoot a step-back three… But he was on fire.  Yeah, 1-for-11.”

We can’t say it enough: Kyle Wiltjer has to hit shots or there is no reason for him to be on the court.  This slump needs to end and it needs to end soon.

The Baylor defense gave Kentucky all it could handle, especially with the zone.  The Bears stretched the floor defensively with Isaiah Austin’s length on one wing and quick, experienced guards collapsing on the ball.  Cal said the 3-2 zone caught the Cats off guard and they weren’t able to attack they way they would’ve liked.  He took some of the blame for his team’s inexperience against the 3-2.  “It confused us,” he said.

Archie Goodwin was Kentucky’s only hope against the zone.  Time after time down the court, UK passed the ball around the perimeter, looking at someone else to shoot, until Archie lowered his head and took it to the rack.  And once again, Archie was too out of control to make a difference.  He wants to take over and be the guy, the will is there, but he still doesn’t know how to close games.  He has to keep up the energy but cut back on the turnovers, costly fouls late in the shot clock, and his throw-the-ball-at-the-rim-and-hope-for-a-foul offensive attack.

Look to see more of the small lineup of Harrow, Mays, Goodwin, Poythress and Noel.  Cal really liked the way the offense looked with those five guys on the court and there is potential in the way they ran the high pick-and-roll with Harrow.  He was able to drive the lane with two shooters on the outside and a cutting Alex Poythress on the baseline, leaving options for the three, a lob, or layup with Nerlens trailing for a putback.  It seemed to work on multiple possessions late in the game but they couldn’t get a stop on the other end, unfortunately.  I think they’ll work a lot with that lineup in practice next week.

21 offensive rebounds. 8 second-chance points.  That’s what kind of day it was.  Kentucky couldn’t find a way to score from right under the basket.

Calipari talked a lot about a specific play he thinks ended Kentucky’s chances of a comeback.  It came when Nerlens Noel blocked a shot on the baseline after UK cut the lead to three, but Baylor recovered and converted an and-one after the offensive rebound.  His frustration from the play is with Alex Poythress, if I remember correctly, who stood and watched Nerlens make the block and then didn’t attempt to get the rebound.  “We have to have that ball to win the game,” Cal said of the play.  “There was no will to win.  Why did you not go get that ball?”

If Poythress made any effort to grab the rebound, UK would’ve had the ball with a chance to tie the game.  Instead, Baylor stretched it back out to six and the deficit never got back down to one possession.

Uncle Julius had another solid game and played great defense on Brady Heslip.  Mays is really UK’s only bright spot in these past three depressing days.  Why can’t he be three inches taller????

Calipari: “We’re not a very good team and we don’t have very good players right now. BUT, I still like my team. We can special or we can be what we are right now.”

We can go watch Alabama/Georgia now.