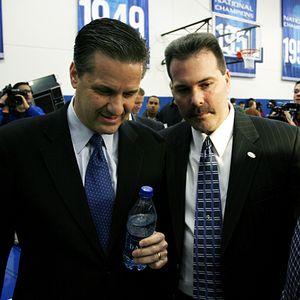 Earlier this week, a State Senator from Louisville named Tim Shaughnessy proposed a bill that would require Kentucky and Louisville to play each other every year in football and basketball. Yesterday John Calipari was asked about the bill before he spoke to a group of legislators and according to Kentucky.com, he said:

“I would hope they (lawmakers) don’t think I need help scheduling,” Calipari said shortly before he spoke Thursday at an annual UK-sponsored lunch for lawmakers. “I hope they have more important things to do.”

33 Comments for Calipari Tells Legislators to Keep Out