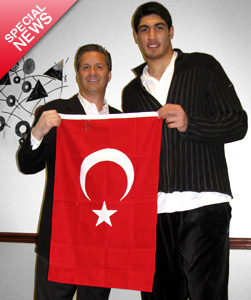 In today’s SEC Coaches Teleconference, John Calipari had a number of interesting things to say, including singling out a couple of players subtly for being what he called “content instead of committed” (more on that in a bit).  The most interesting turn, though, came when he was asked about how Enes Kanter can help this group of Cats despite not suiting up in games.  Calipari quickly responded by saying that he’s worried about getting Enes ready for the NBA Draft now and worried about making this situation one that Kanter can walk away from positively.  As he’s said before, it’s a player’s program and his job within the team is to help each player maximize their potential and reach their goals.  For Enes, that now means the NBA.  But, after that quick note, Calipari went into a much deeper discussion of the events and again outlined his disappointment in the ruling.

Cal again called it a “shock” to the Kanter family and the that he came to Kentucky committed to doing things educationally.  He then added a new twist.  Enes Kanter doesn’t want to go into the NBA Draft this year and the NCAA ruling now forces him to do so.  Just a few weeks ago, Kanter’s father said that he was willing to sit out a year and play next year, but most viewed that as something of a bargaining attempt to get his son eligble at some point.  With Calipari’s comments, that seems to take on a different tone.  And one that makes this seem even more frustrating.

Calipari went on to add that Kanter is the youngest player on the team by four months and laughed at those in the media and at the NCAA (talking to you, Mark Emmert), who called it an easy issue to understand.  Calipari said, “I heard someone say it was “black and white”.  Wow.  It took eight months to decide something that was black and white?”  Cal finished by saying that he’s heard people all year say that Enes would be the best player in college basketball if he could play and he expects Enes to be capable of making those same people declare him the top pick in the NBA Draft.  And, because of this NCAA ruling, that is now what becomes Calipari’s biggest focus for Kanter.

30 Comments for Calipari remains on the Enes offensive