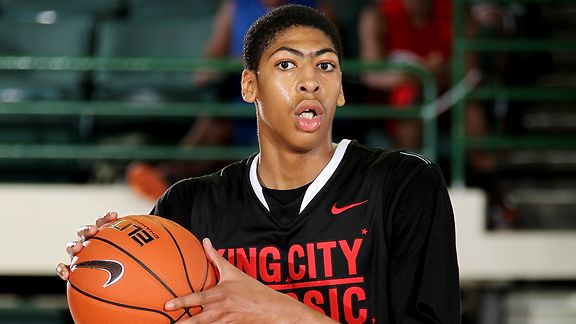 Today John Calipari spoke at a coaching clinic for high school coaches and in the process, talked a bit about his team. For Calipari, the excitement is about his team’s speed as he told the group that the team will be quick and Anthony Davis is a beast. The twitter account Draft Express was in attendance and here were his updates:

— Calipari likes using these basic fundamental drills every practice so his team can learn how to play fast without turning the ball over.

— Cal wants his players playing fast, but without making mistakes. That’s why he works so much on fundamentals of catching, finishing, passing

— Calipari says team will be running a modified version of the dribble-drive this season, inspired by what he learned at the FIBA Americas.

— Guards in corner on dribble drive will first read where their defender is before deciding whether to curl towards middle or cut on baseline.

— Calipari surprisingly says that his teams don’t do any specialized work on half-court defense at this stage of the season. Only offense.

— Surprising because Kentucky is always one of the best defensive teams in the NCAA. I guess the freshmen need more work on offense early on.

— Calipari says its important to know how to ask for help & even more important to teach players that. Talking about Jerry Colangelo’s story.

— Clinic done. Cal talking to press now. Says “this might be the fastest team I’ve coached since 2008. Anthony Davis runs court in 3 steps.”

— Calipari: “There will be 4 super conferences. I said 4 months ago. Our commissioners & ADs are making decisions. They don’t ask my opinion”

10 Comments for Calipari is Excited About His Team