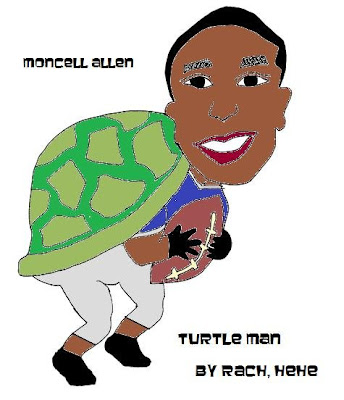 When given the task of writing about one Moncell Allen I thought to myself.. hmm.. what am I gonna do with this?

After hours of grueling deliberation (which means I went into my room, turned on my Xbox, and forgot completely about the assignment) I came up with 2 options..

1. I can do countless hours of research to write an in-depth review over a player whose role I am vaguely familiar with, but haven’t seen much of.. all the while pretending to know what I am talking about and dropping the occasional pop-culture reference for giggles.

2. I can be totally original and write a song about the said player.

I’m guessing the rest of the competition will stick with number 1.

However, I’m climbing out on that limb, baby.

Here it is.. I imagine that you will either love it or hate it.. the Moncell Allen song.

Well let me tell you the story of

A running back that deserves some love

His name is Moncell Allen and

Pound it up the middle, son

With Moncell, we will get it done

But Moncell we must count on you

On the depth chart you are number 2

But Derick Locke, he hurt his knee

And all that Smith has got is speed

Moncell is that raging bull

Give the ball to “Turtleman”

He’s a maniac. He’s our runnin back.

He’s a heart attack. He’s gonna run it back.

He’s gonna run it forward. He’s gonna get some more.

Well let me tell you the story of

A runningback that deserves some love

His name is Moncell Allen and

Pound it up the middle, son

With Moncell, we will get it done

Mosley’s Take: Caleb, well done. The lyrics weren’t incredible nor were they overly funny, but the originality of writing a song and performing said song in video is simply great. That shows a definite willingness to put yourself out there which is something that you can’t be afraid of if you’re going to write for this site. While your lyrics may not have been funny per se, the song was written with a humorous bent and it’s obvious by the way you threw that together that you have command of the written word. Congratulations, you’re already a better songwriter than Kara Dioguardi.