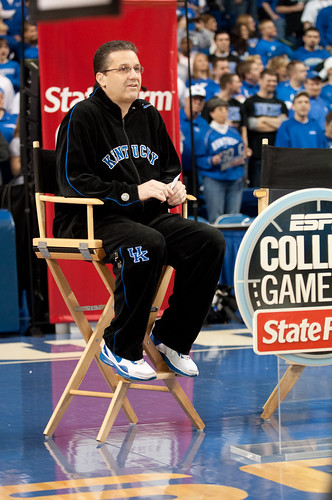 Coach Cal met with the local media this afternoon for his pre-Tennessee chat.  He spoke often about his team being in crisis right now and how he thought they would positively respond to having their backs against the wall.  A few notes…

– In talking about the team being in crisis, Calipari acknowledged that it would have been different today if Brandon Knight had made the shot at the end of the game, but the concerns would be the same.  He said that the good thing is that crisis can bring about change and that he wants his team to do a number of things to get out of the rut.  He said there hasn’t been enough passion, toughness, togetherness or the “will to win” fight from his guys.  He kept emphasizing that this crisis will bring about change in the team and the only way it wouldn’t would be if they didn’t care.  He thinks they do.

– Calipari again reiterated how important it was for his team to avoid bad stretches early in the game and said that is where they are being lost.  He said that sometimes it’s substitutions causing the change in play, sometimes it’s defensive breakdowns and sometimes it’s bad shots.  But, what he is most angry about is that he’s seeing the same things on the Florida tape that he saw against Alabama and Ole Miss and he spent the flight back calling guys up to the front to go over the film.

– Calipari said that all they’re doing right now is playing to get better every game and that by doing so, the wins will come.  He said that the Cats are not where they need to be for March and that if they don’t get better, it will be “ugly”.  They are a close group, but they haven’t clicked yet in the way that last year’s team did.  Right now, he says everything they want is right in front of them and it’s up to them to take responsibility and figure out how to get there.  If they don’t, he’s going to have to take a chance on guys who haven’t gotten a shot at minutes so far.  He cited Eloy Vargas as a guy who stood up and said he was going to show people he could play and out-performed Josh Harrellson against the Gators.

– On the subject of Harrellson, he said they had to get him back to where he was before and that he’s not talking a lot on the floor and that he believes it all comes back to work ethic and wanting to build your own self-esteem.  He said similar things about DeAndre Liggins, who he called the best defender in the country.

41 Comments for Cal says this team is in crisis