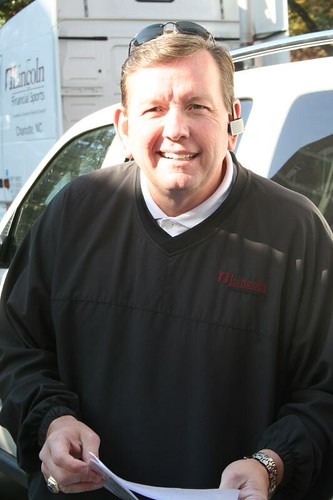 There is a lot going on today everywhere. Many of your wives, children and wannabe girlfriends got together at Midnight to watch “Revenge of the Shirtless Androgynous Male Werewolves”, otherwise known as “Twilight”, we are one day away from NBA Free Agency and my announcement has to be pushed back one day until Thursday morning (really what is a KSR Announcement without a delay?). But all of those tidbits pale in comparison to the 50th Birthday of one Dave “Buzz” Baker. Whether you know Buzz from his work in Lexington on WKYT, his handling of the “Dave, Dave and Dave” shows on JP Sports or his work with the Big Blue Network, Buzz has entered all of our lives that follow UK and he is a genuine rock star. When I think Kentucky basketball broadcasts, really only two names come to mind….Buzz and Rob Bromley. Rob Bromley’s age is mysterious (you could really tell me any number from 45 to 70 and I wouldnt be surprised), but Buzz is hitting the big 5-0 today. Over the last two years or so, we have gotten to know Buzz fairly well, leading to highlights such as when he name dropped KSR on a game broadcast, his infamous commentary during a podcast that still makes Turkey Hunter laugh and his attendance at the Matt Jones Bachelor auction. In every instance, he has been great to be around and he has been wonderful to the site and me personally. We wish him nothing but the best on his birthday and hope you will go give him a shout hello on Twitter or if he you see him pumping iron in Lexington.

— Somewhat of a slow news day today, but the talk all along the internet and behind the scenes, is the impressive performance by Enes Kanter on Monday during a round of pickup games. Now as I have said many times, I judge very little by pickup games, but when a guy is playing against great competition and excelling, you have to take notice. During the games, Kanter was matched up with Patrick Patterson and I had two different reports on the games, both of which said the matchup was a war. Both said that Kanter was great offensively, with one who knows basketball well telling me, “he has the best post moves of any incoming player I have seen at UK in a long time.” Kanter apparently scored a lot on Patterson, but also gave up points as well, with one telling me “his post defense does need work.” But all in all excitement….Kanter is a true post stud and as one observer said, “looks like a guy entering the NBA Draft, not college.”

— We talked a little last night about Josh Harrellson’s improvement, but today another story came out that Jorts is killing it in the weight room as well. According to reports, Jorts is working harder than he ever has in getting in shape, and as I said last night, you can already see a huge difference. I really hope Josh takes advantage of this year as we know he can.

— Potential future Cats are also burning it up. Quincy Miller was the leading scorer again in two games for the USA under 18 team. He is impressing scouts at the tournament in San Antonio and telling people about his love for Kentucky. John Wall also paid a visit to the USA team and said on Twitter that he was excited to see his little bro Quincy Miller. Having John Wall as a representative for your University….well it certainly doesnt hurt in the recruiting game one bit.

— I have to say that the show “Wipeout” entertains me. Does that make me a bad person?

— I have to tell you that I find the Pitino talk of rebranding the program hilarious. First of all, it was definitely needed, despite numerous outcries from Louisville fans that it was not. Pitino hit a year long funk that really was bizarre to watch and his decision to only hire friends and former players on his staff was doing him in. It was smart to bring in an outside guy in Tim Fuller and those that know, tell me that he will pay dividends. But having said all of that, the notion that he will be able to compete with Calipari for recruits is silly. Ten years at Louisville, three people picked in the first round of the Draft. Calipari had five this year. Do your own thing Rick and you can be successful…but dont play Calipari’s game…you wont win.

— If you havent read Patrick Patterson’s Draft Diary for Sports Illustrated, it is definitely worth a view. Patrick makes funny comments about the behind the scenes part of the night, what it means to be a Rocket and Demarcus Cousins’ bling in his watch. Good personality shown by #54.

— A lot of you have been asking for the newest podcast from KSR and we hope to have one very soon. The summer makes it tough for us to all get together, but we have plans to make a couple in the next couple of weeks. We also will be having a series of phone interview podcasts, which we will talk about more later. I thank everyone for their interest and we hope to have a couple for you very soon.

— We often get understandable complaints that we dont focus enough on football here. Hopefully in the near future we will have a football writer that will exclusively cover that sport, but until then we will try to add more tidbits. Brian Eldridge, who has worked for the Scout Kentucky site and is a great guy (and reporter) has come up with his ranking of the 20 best high school football players in Kentucky. A very interesting list that will surely cause debate from the hardcore high school football people.

If you are out tonight watching Twilight, then you likely dont read this blog (if you have done both, please explain who you are in the comments section). Wednesday is the last day of June and moves us closer to real sports starting back up. Our announcement comes Thursday and as always, more nonsense. Stay tuned…..