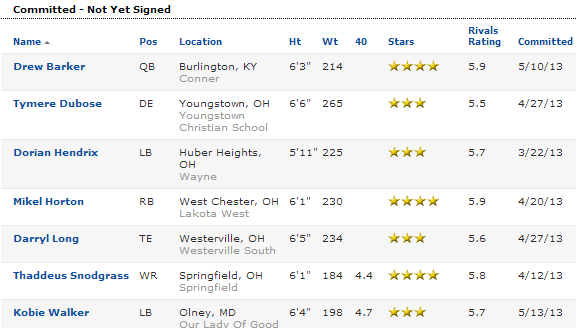 I did a post several weeks ago that I think UK football can be back to being very competitive, and by competitive I mean bowl eligible, as soon as 2014 (Year 2 of Stoops).  Some might think that is ambitious because Joker left quite a mess.  But, I said that because the schedule become more favorable next year, the SEC will likely be weaker, and Year 2 usually goes better for a new coach.  But, another key reason I think 2014 can be a bounce back year for UK is because the roster will be loaded with quality experience at nearly every position.  Below I have broken down each position for what kind of depth it could potentially be equipped with.  Certainly, nobody knows about transfers, dismissals, added recruits, etc. for over a year from now.  But hey, it’s summer.  We always look this far ahead for the basketball team, why not do it for the football team too?

DEFENSIVE TACKLE (Donte Rumph and Mister Cobble starters for 2013, both seniors)
Christian Coleman (Senior): Started 2 games in 2011, played in 8 in 2012, likely backup in 2013
Mike Douglas (Senior): Unsure his role in 2013, for now will put him at this position
Melvin Lewis (Senior): JC Transfer, unsure of his role in 2013
Jabari Johnson (Junior): 2 tackles in 2012, moving to DT in 2013
Thomas Chapman (Sophomore): Redshirted in 2012, Potential backup in 2013
Patrick Graffree (Sophomore): Redshirt in 2012, Fight ahead to see field in 2013
Jacob Hyde (Sophomore?): 3-star recruit, maybe redshirt in 2013 with struggle on depth chart
Adrian Middleton (Freshman): 3-star recruit

Assuming each of the incoming recruits qualifies and makes it to campus and that every scholarship player eligible to return does, you would have:

That is 90 total scholarship players, which is 5 over the limit.  But as we all have seen, football offseason usually bring several players transferring to find more playing time or for disciplinary reasons.  We have already seen Mark Stoops boot several players off this years team.  Point being, the staff looks to be on a very good track to have a very good roster in 2014.  Just remember 1 year from now when UK will be looking pretty, and remember I told you first.

34 Comments for BTI’s Rants and Ramblings: What Kind of Roster will the 2014 Recruits Find