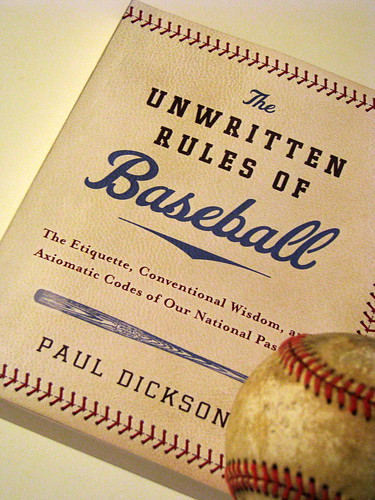 Not to bring up arguments of the past but one of the main reasons that I dislike baseball is this idea that it is a gentleman’s game, composed of the most elite athletes, with all of these unwritten rules on how the game should be played.  All those “unwritten rules” actually do is separate the fans from the players because fans don’t know, don’t care, and don’t respect those goofy unwritten rules.

For instance, on Sunday, the Tigers’ Justin Verlander had a no-hitter going into the 8th inning when an Angels player attempted to get on base by bunting.  Verlander proceeded to throw the ball into right field, leading to a run later in the inning.  After the play, Verlander glared at the runner as if he had done something offensive.  I guess in baseball, if a pitcher has a no-hitter going, you are not supposed to bunt.  Doesn’t matter the score or the situation, you just can’t bunt.  It’s an unwritten rule.  Gag me.

Last season, Alex Rodriguez got into a shouting match with an Oakland A’s pitcher after he ran across the mound after making the last out of an inning.  Because doesn’t everybody know that the dirt on the pitchers mound is sacred, and field players shall not touch it.  Oh, we wouldn’t know that because it is an unwritten rule.  The list goes on and on.

But, I digress.  The reason I rant above is that I wonder if you think being a UK fan has its unwritten rules.  Things that you just don’t do or say.  Things that if you do, you deserve a 95mph fastball to the spine.  I racked my brain this morning and came up with these:

-Never say a negative word about The Unforgettables

-Never say Tubby Smith was good for the program

-Laugh at anything Louisville does

-Football never, ever takes priority over basketball.  Ever.

Those are 7 that came to my mind.  What would be your unwritten rules?