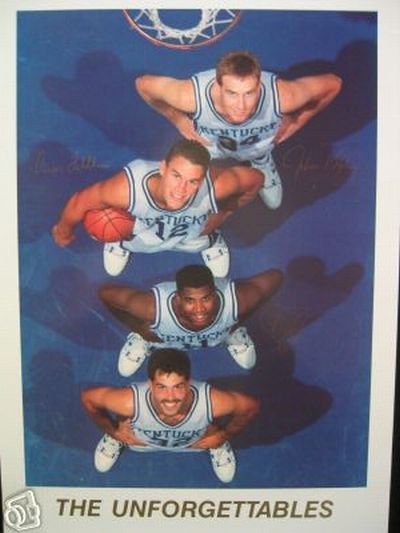 You know, I receive probably 5-10 emails a week from readers, most of which are critical and filled with spelling mistakes.  And those emails are rarely read all the way through and go directly into the outbox.  But occasionally I will get an email that is just too good to believe, and gets saved forever in the inbox.

This email I got on January 18th, 2010, was one such email.  I will not give the name of the person who sent this to me for fear of them being hunted down, but I will say that during future email exchanges, I can promise this guy is a UK fan, and not some UL troll.  So again, before I post the email, let me reiterate: THIS IS NOT MY THOUGHTS, THIS IS AN EMAIL.

I know you have basically made a living out of putting ridiculous things on KSR.  I thought I would pass along an argument I have had with friends and family, all UK fans, because nobody agrees with me and you seem like just the kind of guy who would.  Let me say that I am a HUGE Kentucky fan, and what I am about to say almost hurts me to write, but the more I think about it, the more I think I am right.

Here is my argument: THE UNFORGETTABLES SHOULD HAVE NEVER HAD THEIR JERSEYS RETIRED.

Seems completely blasphemous I know.  But hear me out.  Let me first say that the basis of my argument is that I consider the honor to have your name in the rafters of Rupp Arena to be a great accomplishment, and should be VERY difficult to do.  I don’t think Keith Bogans, Chuck Hayes, or Ramel and Joe deserve to be there.  The only people that need to be put up there that currently are not are Delk, Prince, and Patterson.

But what especially bothers me about the Unforgettables is they were esentially liked by fans, but in reality had average careers, by Kentucky all-time great standards.  And let me be clear, I loved those guys too.  But, consider this, look at the scoring careers of each guy:

Now, consider this stat: Who are the 4 UK players with retired jerseys who played 4 years and scored the least amount of points? Pelphrey, Feldhaus, Farmer, and Woods.

So my question is this: since when did Kentucky put players in the rafters simply for being loved by the fans?  If that was the case, let’s put Heshimu Evans and Cameron Mills up there.  Let’s put Ravi Moss in the rafters too, because people loved him.  No, that just sounds silly right?  Well, you can’t say the Unforgettables deserved the honor because of their stats or team success.  The team missed the tournament once, was banned from two tournaments, and made the Elite Eight in their time in Lexington.  The probation was out of their hands, I understand, and its admirable those guys stuck it out, but is it so admirable that they deserve to be in the rafters?

My final argument is this: If Farmer had been from Colorado, Pelphrey from Massachusetts, Woods from Illinois, and Feldhaus from California, would they be in the rafters?  I say no, even if the Duke game happens.  Simply put, those guys received the highest UK honor for losing an Elite Eight game and being from Kentucky and Southern Indiana.  And I just think that was a mistake.

So, there you go.  Does anybody actually agree with this guy?  I do not, under any circumstance, agree with him.  BUT, I will say the question about those players being from the area is an interesting one.  Give your thoughts on this email and also recognize I am not the only person in the world with crazy arguments.