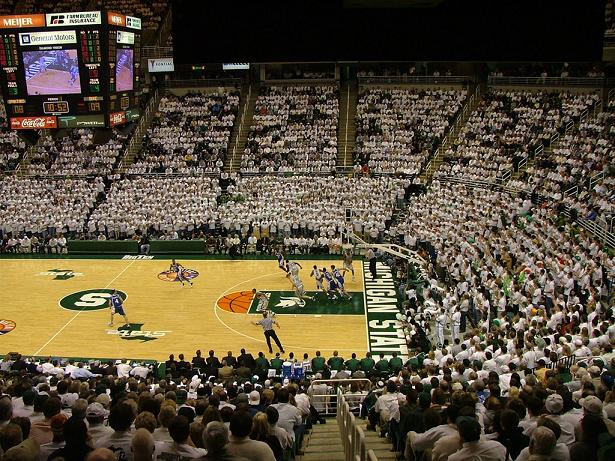 There has been some heated discussion here in Louisville with the creating of UL’s new arena, and how exactly to take advantage of their students.  It is well known that the Louisville “student section” is one of the worst for a major college basketball program.  They are unorganized and generally shown up in smaller numbers than any other top school.  But, part of the blame goes to the university itself, who throws those students into the deep corners of Freedom Hall.  There are games where it seems there are more members of the UL band at the game than students.

So the question is: if the UL students were put into a more prominent position, like the side of the courts, who they become a greater part of the game, considering there is no evidence to support this currently.  Is the reason they are a less than enthusiastic student section because of the poor seats or because of a lack of support of the team?  It’s a legitimate question, but I find it unlikely that someone like Tom Jurich would sacrifice more money to put his students in a better spot to watch the game and make an impact.

This is likely to be a serious topic of discussion if and when Kentucky decides to build a new arena.  Of course, back in May, UK began studying proposals to build a new home for UK.  While this is going to be many years in the future, it is inevitable that UK will play somewhere new in the future, whether its 5 years or 25 years.  And we can all agree that no matter how many years from now, UK basketball will still be a passion for UK fans and especially students.  Currently, UK students sit in one end zone of Rupp Arena, and are in general a loud an boisterous group.  They body paint and make signs and harass opponents with the best of them.

But, how much more of an impact would the students make in given one side of the court to occupy?  If you type in the words “best college basketball student sections” into google, here is the list you get.  Kentucky clocks in at #2.  Now, while I think this is a little high, UK’s students are without question a Top 10 group.  But, when you look at the Top 10, 7 of the schools have student seating on the side(s) of the court.  North Carolina, Kansas, and UK being the exceptions.  This tells me that when students are given some of the best seats in the house, and have a team to back it up, they become a true IMPACT on the game.

We can hate on Duke all we want, but I think they have an actual impact on their opponents.  What is the impact: I would estimate 5-10 points.  Same can likely be said for Michigan State, who I always think has a fantastic student fanbase.  When Florida has great teams, their student section is usually rocking.  Imagine how much of a point impact a UK student section would have if place right on the outside of the court.  I would think that Duke would be high school-like if compared that type of UK student section.

So, what is the drawback?  Well, if you are UK, the drawback is a loss of money.  Obviously, UK athletics, and especially UK basketball, is a big business.  The goal of Mitch Barnhart is to win, win big, and make the school money.  If you took away one side of lower arena seats, you lose alot of high priced season ticket money.  I wouldn’t even be able to estimate the loss of revenue for the basketball program.  BUT, I think it would be reasonable to RAISE student ticket prices if the seats were better.  So, a little of the loss could be made up there.  And really, the question has to be asked: how much profit is enough?  Instead of making 15-million dollars (like in 2009), couldn’t UK survive making 14.8 million?

Take a look at this revenue chart for the BCS conference school for the 2008-09 basketball season.  Schools that have sideline student seating and those that don’t seem to have very little difference in total revenue.  Michigan St. made over 1-million more than UK last season and has student seating around their ENTIRE lower level.  If they can make a significant profit without half of their lower level seats, couldn’t UK?