1) As an American, nothing makes me prouder when we only lose to Germany by 2 goals and Nigeria by 1, but stomp the living crap out of El Salvador.  But hey, we have been climbing that ladder to elite status for 20 years, its a slow process.

2) Nothing gets my competitive juices flowing like watching 2 hours of a game without scoring.

3) It makes me reconsider my manhood because I never learned how to drop to ground and writhe in “pain” when barely touched.

4) I can’t wait to hear 90 consecutive minutes of buzzing caused by those fantastic noisemakers.  The sound of a swarm of bees is always what I want to hear during a sporting event.

5) If there is a better announcer than the guy who yells “GOOOOOOOOAAAAAAALLLLLLLLLLLLL” for 5 minutes straight, I don’t know where he is.  I mean “Do you believe in miracles” is just a drop in the hat comapred to a guy who scream goal for a long time.

6) I always wondered what a top tier soccer game would look like in the booming South African metropolis of……….?????

7) You have to admire the coaching of a national soccer team.  The guy has to sit there, occasionally scream at players who couldn’t possibly hear him, and then jump up and hug his assistants every time a goal is scored.  Impressive tactician.

8 ) Nothing like seeing flares slung onto the field.  That’s not called being an idiot, its called loving your team and sport.

9) Hey look, ties!!!!  Nothing like watching a game for 2 hours and NOBODY WINS!

10) And my favorite part of soccer.  The fact that everytime you watch a soccer game, you are reminded that “RACISM IS BAD”.  Thanks, I had almost forgotten. 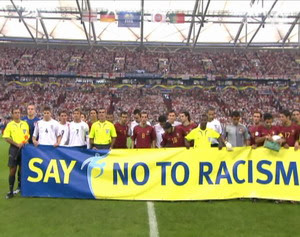 What, did you think I was gonna actually write a positive post about soccer?

(In all seriousness, and keep this between you and me, but I am actually looking forward to the World Cup, and I always have.  It’s bigger than the Olympics in my opinion, and anytime there is a country versus country battle, it interests me.)