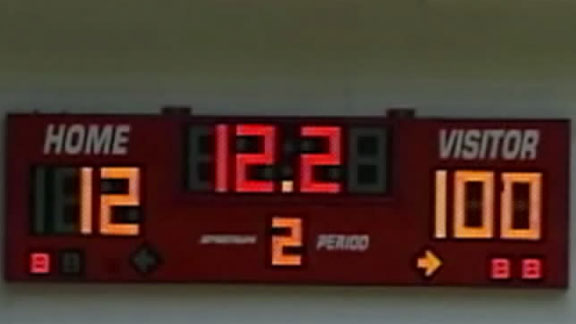 That is question that has been thrown around throughout the high school basketball season in Texas.  Because there is a team there, Yates High School, that presses the ENTIRE game and continues scoring with no concern for margin of victory they are smashing opponents by.  They finished 34-0 and ranked as the #1 team in the nation by USA Today.  It’s also the same reason their coach, Greg Wise, has been under some serious ridicule for showing no concern for the integrity of the game.  Rick Reilly wrote a particularly scathing article about Wise in ESPN the Magazine.

Here are some of the scores that Yates High has beaten opponents by this season:

Now, when you look at those scores and many of the others Yates won by this season, it becomes clear that Wise tells his team to play it out to the final buzzer, and whatever the score ends up is what it ends up.  Wise admits that his team is trying to score as much as possible, and he is not gonna ask his team to quit playing like they practice.  It would be easy to call Wise a scumbag and move along.  But, I don’t think the argument is that simple.

Because Wise makes a very good point that many people don’t think about.  Wise has 10 players on his roster, and when the game gets out of hand in the 2nd half, he will put in his 5 WORST players, but also tells them to play as hard as possible, including pressing.  It a normal situation, the 5 worst players on a high school team will see very little clock.  And most of the time when they do get in the game, it’s only because the game is out of hand and the coach tells them to hold the ball and not attempt to score, so as to not “embarrass” the other team.

But, Wise argues that his 5 worst players practice just as hard as the best guys and practice the offense and defense just as much as the other players.  So, when they get into the game, they should have the opportunity to execute what they have practiced. Does Wise have a point there?  I truly think so.  We don’t tell high school golfers who clearly have the other team beaten to miss a 3-footer on purpose so that the total scores will be closer.  We don’t tell high school tennis players to miss intentionally so that the other player can win a game or two.  So, why should a team sport like basketball be any different?

If anything, the problem here is adults (like Reilly) who feel that high schoolers, aged 14-18 can’t handle losing by 75 points.  If anything, the parents and relatives of the losing players probably take it harder than the players themselves.  I agree, it is embarrassing to lose a game by that much, but I would think for a high school student, waking up with a pimple on the nose or breaking up with a girlfriend would be more embarrassing.  High school athletes, even at the varsity level, can more easily bounce back or forget a loss than a college or pro athlete will.  So, let’s put this in perspective.  There are worse things in a kids life than losing a GAME by a large margin.

That being said, if I were a coach, this would not be my strategy.  There are sometimes unwritten rules in sports, and one of them is when the game is in hand, call off the dogs.  If anything, Wise tells the dogs to attack harder in the 4th quarter so his team can reach 100 points.  In the Reilly article, Wise talks about the fact that he wanted his team to break the national record for consecutive games over 100 points, which Yates failed to do.  I don’t think Wise was going for the record to humiliate the other team, he just wanted that record for his team.  I understand you want your bench players to be able to try and score as well, and to execute the offense they have practiced for months, but thats why there is practice, and that’s why generally in high school, the juniors and seniors play the most.  They have gotten the most PRACTICE at what you do, not just game action.

So, besides the question of whether what Yates did was appropriate or not, here is another question for you: Is scoring as much as possible and winning by as much as you can OK in any level of sport? Is it OK in professional sports?  College sports?  Or is it never OK?

Keep in mind that if you think its wrong to “run up the score” in college, Kentucky kept its best players in the game LATE in blowouts over Tennessee, East Tennessee St and Wake Forest at the end of the season.  And while I don’t think Coach Cal was trying to embarrass the opponents, I think he did keep John Wall and starters in the game a little later than is common.  Just keep that in mind.

By the way, if you were wondering what Yates looks like playing, here is a highlight video from a game.