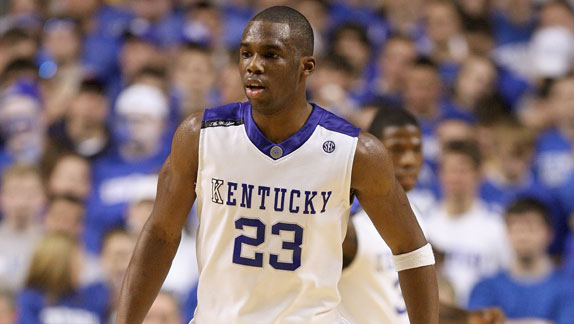 Is Jodie Meeks one of the 10 best UK players in the last 10 years?

The last 10 years at Kentucky have really been quite a wild ride.  Starting with the 02-03 season, Kentucky has won 4 SEC Championships, 4 SEC Tournament Championships, and 1 National Championships.  We have had #1 recruiting classes under 2 coaches (Tubby and Cal, don’t forget) and seen 2 #1 draft picks, with the potential for a 3rd.  We’ve also seen some down times, with the last 2 years of Tubby and the 2 years of Gillispie (although BCG’s first year was better than people remember).  But above all else, we have seen a lot of great players come through Lexington.  But, who are the best 10?  I ranked my best 10 players, based on talent alone, and then gave a Bonus 10 below that.  Again, this is not ranking players on their UK careers but just on their talent alone.

1. Anthony Davis: National Player of the Year, Final Four MVP, and crushed school record for blocks in a season.  Davis ranks 4th in school history in blocks.  IN ONE SEASON.  You could make a serious argument that Davis had the best individual season in UK history, when you throw in the national title as well.  He is likely the most athletic freak to play for UK.  And he did it all while becoming a cultural icon with the unibrow.

2. Keith Bogans: 4th in school history in points, but for the sake of this argument, only Bogans senior season is being taken under consideration.  Even still, that senior season was one of the 10 best in UK history.  Bogans led the first ever (and only) SEC team to go undefeated in regular season and tournament play.  Bogans combination of deadly jump shot and mid-range game made him a nightmare to guard.  But people forget he was also the defensive stopper on that 2003 team, and maybe argue his sprained ankle prevented him from shutting down Dwayne Wade.  Bogans was the unquestioned team leader of the 2nd best UK team since 1980.

3. John Wall: Was a talent that UK hadn’t seen at the point guard spot.  Maybe the fastest player end to end in school history.  But his importance was bringing UK back from the depths of Billy Gillispie, but doing it in a cool way.  Wall brought the Calipari-era into every top recruits home and you could argue he deserves some of the credit for the success the next 2 years.  Oh, plus he was a hell of a player.  Despite a struggling jumper at times, Wall was so good at getting the to basket it really didn’t matter.

4. Patrick Patterson: This guy could really do it all.  He could score, rebound, pass, block shots, run the floor, and he was a strong competitor.  His broken foot in the 2008 season ended any hopes of a long tournament run.  He stepped onto campus and immediately became the best player on the team.  If he had returned, he had a good shot at becoming a 2,000 point scorer.  Patterson’s consistency and leadership boost him into this spot.

5. Michael Kidd-Gilchrist: Can we say potentially the best motor to play the game at UK?  I have argued Gilchrist was more important to the 2012 championship than Anthony Davis.  I am not sure UK wins that title without either guy, but MKG often made that little hustle play, that putback, that block, that demoralized a team, stopped a run, or put an emphasis on a UK run.  Incredible defender, great in transition, and an improved jump shot made him tough to handle in February and March.

6. Brandon Knight: Probably the best pure scorer in the Calipari era.  Fantastic jump shot, but also an incredible ability to create his own jump shot, whether off a screen or off the dribble.  Plus, had 2 iconic baskets in the same NCAA Tournament.  Knight often carried that team single-handedly, and was for sure the guy to get the ball at the end of games.  I always liked to consider him a better version of Jodie Meeks.  Or certainly a guy who could do more things than Meeks.

7. Demarcus Cousins: People forget that Cousins was a bit of a struggle on the offensive end at the beginning of the 08-09 season.  We forget because he became such a force by the end of the year.  I would doubt you could find a guy who improved in one season more the Cousins.  The best pure center at UK since Sam Bowie (until Davis came along), Cousins provided UK with the punch down low while Wall did it in the open floor.  Cousins probably had more offensive game than Davis, but the addition of defense is what pushes Davis ahead.  Wish he could have had that Final Four.

8. Chuck Hayes: Did more with the skills he had than anybody.  Had no offensive game to speak of when he came to UK, but became quite the scorer in the low post his last 2 years.  Was one of the best rebounders to ever play at UK, especially for his size.  A great competitor, fan favorite.

9. Nerlens Noel:  He would have stretches in games where he had just as much an impact, maybe more, than Anthony Davis did.  His 2nd half against Ole Miss was legendary.  But a lack of great guards around him often hurt his production.  His defensive game was certainly one of the best ever seen in Lexington.  Offensive game was a developing creature and likely what keeps him out of the Top 5.  Plus, we didn’t find out how good he could become after his knee injury.

10. Jodie Meeks:  Meeks probably deserves to be on this list just for his scoring record game against Tennessee.  But, he also developed his game that junior season into becoming a complete player.  Defense was sometimes an issue for Meeks, but got better each season.  Was hampered by injuries his first 2 years.  Plus, had to suffer through Billy Gillispie.  Nonetheless, the best scorer at UK since……….Mashburn?  Issel?  I think he belongs in that company when it comes to scoring alone.  And for that, it still just makes him the 10th best player at UK in the last 10 years.

OK, so there is my list.  What would yours be?  Again, we are using any player that played at UK from the 02-03 season on.

94 Comments for BTI’s Rants and Ramblings: Ranking the 10 Best Players for the Last 10 Years