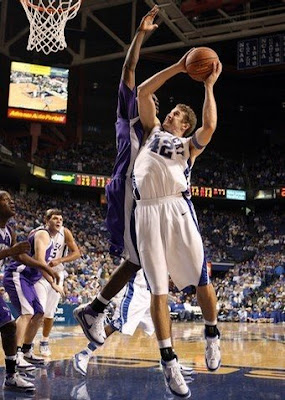 I debated long and hard about whether or not to write a lengthy post today about the many issues going on with this team right now, but after yesterday’s article about being a good fan, I have decided against it in fear of being too critical of the players.  I am certain that as crappy as we feel about the loss yesterday, the players feel worse.  And if they don’t feel worse, then there is no hope for them anyway.

But, there is just one criticism that I have to address and I want to put a lightning poll out there.  I know Beisner said he wasn’t going to list the 1 minute of greatness that was Eloy Vargas’ play last night, but I just have to:

-Vargas comes in with UK up 15-13
-He gets the ball on the baseline, is trapped and throws a wild pass that is stolen and leads to dunk
-On the next Bama possession, he goes up for uncontested rebound, can not hang on to ball, Bama recovers and proceeds to dunk
-On the next Bama possession, Eloy is pick and rolled, rotates waaaaaayyyyyy late and Bama gets a layup
-Cats down 19-15, Vargas is pulled

Now, that is as far as I am willing to go in being critical of the kid because I think the plays above explain themselves.  But, as Matt pointed out on the call-in show last night, you have to question what exactly Vargas does that is positive.  What does he actually give you when he is on the floor?  And it reminded me of the exact same debate that UK fans with another player just 3 years ago.  A man named Mark “Floury” Coury.

So, here is the poll I want to take in the comments section: Who is better: Eloy Vargas or Mark Coury?