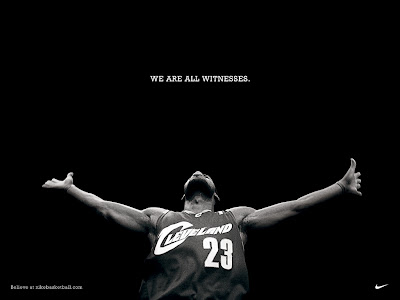 WHEN ARE WE GONNA WITNESS YOU WINNING A TITLE??

Some notes about one of the dumbest saga in America’s sports history:

LEBRON JAMES
-The way he has handled this entire free agency process has been one of the most self-absorbed, arrogant behavior I can remember from an athlete.  Lebron will never be Michael Jordan, EVER.  Jordan proved his greatness on the court, while Lebron is trying to prove his greatness off the court.

-If I bet you anything, I will bet you this: Lebron will lie to everyone’s faces tonight.  Because if he says some form of the words “Winning a championship is most important”, he will be bold faced lying, UNLESS:
a. He goes to Miami
b. Takes the league minimum salary and joins the Lakers

(Late Note: Reports are saying that Lebron is leaning Miami, which means maybe I am wrong on this point, but I have been wrong many times before.  But even on this, if Lebron really wanted to win that bad, he would take a massive pay cut, allowing the Heat to sign other good players, as opposed to the crap they are going to have to get now.)

-The fact that ESPN just bent over to Lebron’s wishes and took it straight in poop hole in their programming is laughable.  5 hours of coverage of this decision is puke-inducing.  Luckily, I will watch all of 0 seconds of it.  I hope they do the same when Kobe comes up for free agency.  You know Kobe, the guy who has actually won some titles in his career.

DWYANE WADE
-Way to use your children to improve your image there D-Wade.  After just saying that his #1 priority in choosing a team was “family”, he then chose the team who is centered furthest away from his children.  Yeah, that has to impress them Dwyane.  Way to be a good father.

NEW YORK KNICKS
-Way to give an overrated soft center a max contact after the guy has already had one major knee surgery.  That was a typical Knicks move.