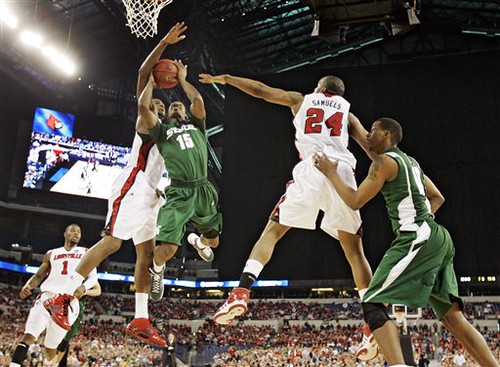 March 29, 2009.  The date that truly changed EVERYTHING about the state of basketball in the state of Kentucky.  On that day, Michigan State whipped the best Louisville team since 1986 (yes, even the Final Four team) in the Elite Eight.  And then the ball started rolling with maybe the best turnaround year in UK history and the worst fall apart year in UL history.  Let’s take a quick rundown of events:

March 29, 2009: Michigan State 64, Louisville 52.  Remember, that UL team was the “best team in the country”, and Tom Izzo made Rick Pitino look like an absolute fool on that night.  A Michigan State team that had NOWHERE near the talent that UL had, didn’t have nearly the amount of fans in Indianapolis, and had a much more difficult road to this game.  And even with all that, the Spartans were never really challenged in the 2nd half, and waltzed their way to the Final Four.  If Cards fans only knew what was to come.

April 1, 2009: John Calipari is officially announced at Kentucky coach.  At the time of his hiring, Calipari had a potential starting lineup of Kevin Galloway, Matthew Pilgrim, Perry Stevenson, Ramon Harris, and Daniel Orton.  Instead, Cal announced from Day 1 that he wanted to win, and win immediately.  This includes the removal of series current players, and commitments like Dakotah Euton.  A return to greatness, if you will.

April 8, 2009:Demarcus Cousins commits to Kentucky, starting the ball rolling on the best recruiting class in UK history.  Samardo Samuels is quickly put on suicide watch knowing what was coming in December.

April 21, 2009: Daniel Orton decides to stay with Kentucky, basically assuring Kentucky will have the tallest team in the country.  Then it turns out that all that size actually was skilled, and Kentucky could not be stopped.

April 22, 2009: Jeremy Tyler decides to not attend Louisville and instead play in Israel.  He then plays like a typical UL recruit, comes home with his tail between his legs, and says “still beats actually playing for Louisville”.

April 24, 2009: Karen Sypher charged with extortion attempt of Rick Pitino.  At the time, there was actual sympathy for Pitino, but in just a couple months Pitino goes as bat-crazy as Drew Franklin at a Legends game, and likely accepts the diseases he has that Franklin lives with each day.

May 5, 2009: Eric Bledsoe commits to Kentucky.  Probably the surprise commitment of the Cal class, Bledsoe ends up playing shooting guard most of the season, showing flashes of brilliance, and earning a likely first round draft pick spot.  Bledsoe’s greatest trait though was making Reginald Delk pee in his pants at Rupp Arena.

May 8, 2009: Patrick Patterson decides to return to Kentucky, cementing himself as the greatest Wildcat since Mashburn.

May 19, 2009: John Wall commits to Kentucky.  Wall frankly doesn’t get the pub of his much more heralded classmates.  Wall’s game is a terrible match for the Cal system and the fans tend to not enjoy his play whatsoever.  Wall will leave UK after one season a disgrace.  (WHACK!!!)  Sorry, I let Kate type those statements.  She is back in her place now.  Clearly, this was THE moment where UK came back to elite-status.

August 12, 2009: Details of Pitino and Sypher encounter come out.  All of the sudden the sympathy goes from a Hall of Fame basketball coach to a beach blonde prostitute wannabe who clearly had the ta-tas enhanced about 6 times too many.  And we also learn, as Bomani Jones pointed out, the Pitino doesn’t know how to google the prices of things.

August 26, 2009: Pitino goes on syphilis-fueled rant about media coverage of extortion plot.  And Ted Kennedy dies.  Media chooses which one is more important.

December 5, 2009: Kentucky beats North Carolina, taking their first permanent step towards taking back the college basketball throne.  Cats put together a 28-2 run, giving fans its first true glimpse into how special the talent in Lexington is.

December 21, 2009: Kentucky doubles up Drexel 88-44, becoming the first team to 2000 wins.  Louisville has plans to make it to 2000 before their new arena becomes their old arena.  Those plans are tentative though.

January 2, 2010: Kentucky beats Louisville both physically and on the scoreboard.  We learn that when you touch Demarcus Cousins with your knee, you will get an elbow to the face.  That made 2 in a row in basketball and 3 in a row in football for the Cats over the Cards.  And the world is right once again.

March 6, 2010: Louisville beats #1 Syracuse in final game at Freedom Hall.  And all it took was Jerry Smith to get hurt and Kyle Kuric to turn into Lebron James for a night.

March 11, 2010: Cincinnati topples Louisville in Big East Tournament.  Fans continue to wonder why in the hell Jerry Smith is on the floor.

March 14, 2010: Kentucky wins the SEC Tournament for the first time since 2004.  And they do it in AMAZING fashion with a game tying Cousins basket at the buzzer, followed by John Wall putting a Micah Johnson hit on Cousins because he didn’t know the basket only TIED the game.  Didn’t matter though, Cats win in overtime.

March 20, 2010: California slaps Louisville all over the floor, and knocks the Cards out in the 1st round of the NCAA Tournament.  Cards fans actually party in the streets of Louisville after the game because Edgar Sosa Jerry Smith has run out of eligibility.

March 23, 2010: Enes Kanter commits to Kentucky.  Tomlin has yet to stop writing jokes for that one.  Suddenly UK is going from Boogie to Gheorghe Muresan at the center position.  And we are damn happy about it.

April 14, 2010: Brandon Knight and Michael Gilchrist commit to Kentucky, giving the Cats the top point guard in 2010 and the best overall player in 2011.  John Calipari is overheard saying “I didn’t even recruit either of these guys.  Damn I’m good.”

April 17, 2010: Michael Chandler opens his recruitment back up, meaning Louisville’s 2011 mega-class continued to crumble away for Pitino.  It is especially tough for Rick because his dignity crumbled away so long ago.

April 17, 2010:Doron Lamb goes and nationally TV and gives the Cats another 5-star recruit for the 2010 class.  Pitino promises to get a 5-star recruit to send his intentions by telegraph before the summer is over.  Some recruiting analysts claim this is a strategical error.  Evan Daniels says it’s a 60-40 bad decision.

391 days.  Thats all it took.  Someone should write a book with that title, 391 days.  Of course, if Terrence Jones commits on Friday, it would need to be called “396 days”.  And then hopefully CJ Leslie commits 4 days after that and then we can just stop on a nice round number like “400 days”.  OK, thats it.  After 400 days, enough with the big commits, Cal.